Well, it was inevitable that I'd be bored by now- after blogging every single day in April for the A to Z Challenge (I did something on Sundays, too). Five days into May, my blogging calendar is virtually empty so I'm now aiming to fill up the spaces. Anyone like to visit?

Yesterday, I posted on my regular Writing, Wranglers and Warriors slot and then got on with my current writing - my sequel to my historical novel The Beltane Choice.

It's all about continuity and familiarity, isn't it?

I was familiar with the buzz of the daily challenge and knew my WIP would suffer, since I also spend a lot of my week on family commitments that cannot be changed. There's no way I'm going to miss out on the couple of days a week that I childmind my grandchild. She's a complete revelation - a joy to behold  -so although I may not be adding thousands of words to a story during those days, every picture tells one. Here is said child at 20 months totally absorbed in making 'sausages' with her playdo-her immediate choice. I guess she must like sausages! Grandma, at this time, was getting on with some baking of Welsh Griddle Cakes (Yes, I sometimes bake stuff that's not Scottish!) 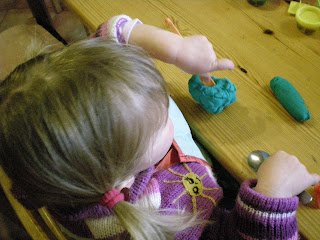 I won't be telling my real grandchild's story within my sequel to The Beltane Choice but she gave me the impetus to include a little one as part of the whole scenario, so watch out for the engaging bright child! Even back in Celtic/ Roman Britain I'm absolutely sure children were just as amusing at times and just as keen to learn.

So, that tells you a little of my quandry at present regrding my novel. I have a basic plan but I'm a 'pantser' who keeps sneaking in new bits to hopefully enhance the story. It means my current writing is hampered by a fits and starts syndrome that's of my own making. If I were the kind of writer who can pick up at exactly the last word written and carry on with the plot, I'd be feeling hunky dory- but sadly I'm not. Not that kind of writer and not feeling joco! Re-read, Revise and then, maybe move on is my motto. It's back to that familiarity and continuity thing again.

At around 100,000+ words now my novel needs a good clear out so that my ending can be spectacular but my energy is flagging. How do I propose to get that energy boost back?

If you've got any ideas then please give me a hint, but till then I'm going to do a little bit every day of all the domestic and garden jobs that have been totally neglected. I've got a pretty large garden that has a tendency to run away with me! There's been almost no familiary or continuity there (except on days when out with my grandchild and though we potter for a couple of hours I have to be realistic and say not much gets done when grandma is busy playing with the wean) But if I don't get the garden in order I'll be snookered for the rest of the spring/summer seasons and eveything will take longer to maintain.

That couple of hours away from the keyboard just might give me the perk up I need. Anyone for fresh air?

Watch out for next week's updates  - on my WIP progress report!

Have a nice Sunday.
Slainthe!
Posted by Nancy Jardine Author at 09:24