Happy Wednesday to you!

I research when I feel the urge, though Wednesdays might be a more focused day for my research from now on. The reason is because our new Ocelot Press Readers Group on Facebook has begun  a 'WeSearchWednesday' feature.

Today, I've been researching more about Martius festivals - i.e. of the month of March. This new focus is about the Suovetaurilia sacrifices and I've been getting my information from my brand new birthday book - Roman Art from The Louvre. 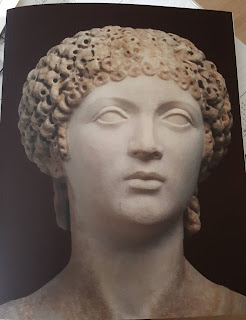 Research is definitely all in the interpretation! A lot like my historical fiction writing.

Ancient Roman sacrifice was a popular event. and during the month of March there were plenty of opportunities.

An anonymous drawing of this fragment of a marble relief is in the Louvre collections. (I'm still trying to prove the whereabouts of the original marble since it used to be in the Grimani / Borghese collection.) Sadly it has only been partially restored in recent centuries after being discovered during the Renaissance era. 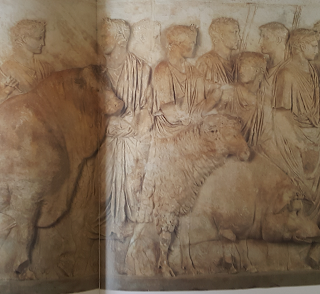 The animals are led by three victimarii, three assistants who carried out the sacrifices. Each of them wears a toga bunched up at the waist rather than a limus, a sacrificial apron. Perhaps this is because it was an even more special sacrifice than many would have been. Read on to find out...

Behind the bull is the popa, his sacrificial axe carried over his shoulders. Personally, I think the togas are bunched up to avoid the inevitable blood flow that would result after the sacrifices.

The sizeable pig is quite inquisitive and shows few signs of the fate in store for it. But that again is the artistic licence. Cowardly animals, like cowardly people, would not have been represented in Ancient Rome - except, of course,  if they were vanquished barbarian tribespeople!

It's difficult to see the details but the three major figures are crowned with laurel. This signifies that the lead priest is the emperor.

The dating of the marble is probably first half of the 1st Century AD. Emperors who were known to have been associated with these ceremonies were Augustus and Tiberius AD. 14; Claudius and Vitellius AD 47/48; and Vespasian and Titus c. AD 72/73 - according to their consular and religious offices.

Since I write about the latter part of the 1st C AD,  I'd like it to be of Vespasian but because the main faces have been restored it's difficult  for the experts to decide which emperor it might be. that has also obscured the ability to assess according to the stylistic criteria of the eras e.g more realism during the time of Claudius.

Even more complicated is the fact that what is seen above was likely to have been only one side of a double Suovetaurilia composition, since there's a hint of a second altar at the right hand side.

Which of the emperors would you like it to be?

This is another long frieze of a Suovetaurilia ceremony.

Posted by Nancy Jardine Author at 18:08