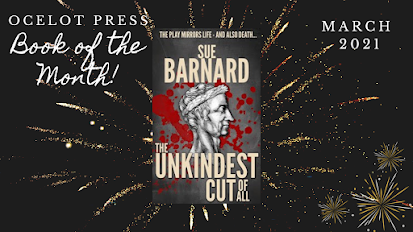 Welcome to the brand-new Ocelot Press Book of the Month.

If you read my post yesterday on really ancient Roman Festivals, you might have noticed that I made absolutely NO mention of the 15th March being the Ides and a day to BEWARE OF (according to William Shakespeare, and with reference to his tragedy Julius Caesar). That was because this post, today on the 15th March, was already scheduled and entirely appropriate for me to post today!

Each month, Ocelot Press will focus on one particular Ocelot Press publication. This month it is Sue Barnard’s romantic intrigue The Unkindest Cut of All , the action of which takes place over one week in March, during an amateur dramatic society’s production of Shakespeare’s Julius Caesar.

I thoroughly enjoyed reading this novel, based around the thespian environment, and loved it even more because Julius Caesar was one of the plays I studied as a 15 year old at school for my Scottish curriculum  'O' Grade  in English' examination, I walked the corridors of my school for months looking behind me because, believe it or not, I was born on the Ides of March. I'd walk around a corridor to find someone would theatrically 'jump out at me' brandishing an imaginary Roman dagger. Julius Caesar is a very memorable play, but so is Sue Barnard's The Unkindest cut of All'. 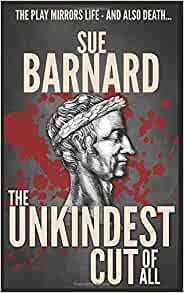 BEWARE THE IDES OF MARCH…

Brian Wilmer is God’s gift to amateur dramatics – and he knows it.  So when the Castlemarsh Players take the ambitious decision to stage Shakespeare’s Julius Caesar, there is only one man who can play the title role – even though Brian’s posturing “prima donna” attitude has, over the years, won him few friends and many foes.

Rehearsals progress apace, and the production draws ever closer.  But when another member of the cast has to drop out due to illness, local journalist Sarah Carmichael (a stalwart of the Players’ backstage crew) suddenly finds herself called upon to step into the breach at the eleventh hour.

Not surprisingly, Sarah finds that Brian is in his egotistical element playing the mighty Caesar.  The fact that the final performance of the play takes place on the infamous Ides of March – the day when, according to tradition, Caesar was fatally stabbed – only adds to the excitement.

But tragedy is waiting in the wings.  And when it strikes, it falls to Sarah – with the help of Brian’s personable and fascinating nephew Martin Burns – to uncover the incredible truth of what really happened…

The Unkindest Cut of All is available from Amazon in Kindle and paperback formats.  To celebrate it being the Ocelot Press Book of the Month, the Kindle edition is currently available at the special offer price of just 77p (or the equivalent in your local currency).  To find out more, click HERE

And here’s a ***special treat*** for anyone who orders the e-book during this month.  Post a screenshot of your Amazon order in the Ocelot Press Readers Group on Facebook, and you will be entered into a draw to win a signed copy of the paperback edition.  The draw will stay open until the end of March 2021.

Sue has very kindly sent along some excellent fun facts about Julius Caesar. I love them and hope you will, too.

(p.s. remember that calendar I posted yesterday, that complex one that was typical of what decorated the walls in Ancient Rome?)


When Shakespeare wrote his play Julius Caesar, his main source was the work of an ancient historian called Plutarch.

One of the most famous phrases associated with Julius Caesar is the line Beware the Ides of March, which occurs in Shakespeare’s play.  IDES was a feature of the ancient Roman calendar.  It referred to the first full moon of the calendar month, which usually occurred around the middle of the month.  In March, May, July and October the Ides fell on the 15th of the month, whilst in other months it was the 13th.  According to tradition, Caesar was assassinated in Rome on the Ides of March in the year 44BC.

It is believed that Julius Caesar was born two days before the Ides of July in the year 100BC – but contrary to popular belief, he was not born by Caesarean Section.  Although the practice did exist in Caesar’s time, it almost always resulted in the death of the mother so was only performed in extreme circumstances.  In fact the word Caesarean has nothing to do with Julius Caesar – it is derived from the Latin word caesus, meaning “cut”.

Caesar married three times – first to Cornelia, then to Pompeia, and finally to Calpurnia.  He also had a number of extra-marital relationships, including one with Cleopatra VII, Queen of Egypt, and is believed to be the father of her son Ptolemy Caesar (later Ptolemy XV), born around 47BC.  The Ancient Egyptians referred to Ptolemy as Caesarion (meaning “Little Caesar”).

Originally CAESAR was not a name – it was a title, meaning EMPEROR.  In Classical Latin it is pronounced the same as we pronounce the modern German word KAISER.

In a traditional pack of playing cards, Julius Caesar is represented by the King of Diamonds.

There are no living descendants of Julius Caesar.  Although he had several children by his various wives and mistresses, none of them produced any surviving issue.

Remember to take that photo of your copy of The Unkindest Cut of All and post it to the Facebook Ocelot Press Readers group and enter the competition there.

Posted by Nancy Jardine Author at 08:31