Martius – which was the first month of the pre-Julian Ancient Roman calendar – was the month dedicated to the god Mars and it was as busy a month as a few of the others!

In Ancient Rome, the concept of an official holiday from work did not seem to exist but there were many feast days instead which were a time to celebrate, even if only a little by the poor, or if you were a slave. The 9th of March was one of those very special days, and was the day of the ancilia. Twelve sacred shields of a notable shape were brought out and paraded through the streets, carried by twelve dedicated and identically dressed priests named the Salii. According to legend, the Salii order of priests was specially created during the reign of Numa Pompilius, the second king of Rome. Their dedicated purpose was to ensure the safety of the twelve shields and it was their job to display them to the people of Rome, a parade which began on the 9th of March.

Why twelve shields and twelve priests?

The story of the ancilia, like many ancient legends, was probably created to boost the power of the state. One version of the story tells that during the reign of Numa Pompilius, a devastating plague swept through Rome. Living in this current time of the Covid 19 pandemic of 2020/2021, it’s easy to see that ancient people needed something to account for the desolation caused by such a disease. A divine intervention was created to bolster the allegiance and spirits of those who remained alive. Magically, or otherwise, the story tells of a shield falling from the heavens. After this event, the progress of the plague slowed down and a voice was heard to say that Rome would be mistress of the world while the shield was preserved. 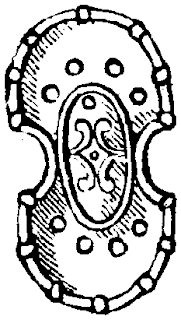 The shield became regarded as one of the pignora imperii, items which were sacred guarantors that would maintain Rome as a sovereign state, a sovereign entity. (The Greeks had a similar equivalent regarding their Palladium) However, in case someone tried to steal the initial shield that fell from the heavens, in a similar way to Ulysses stealing the Palladium, Numa Pompilius made a declaration. He ordered that eleven exact copies of the shield be made which were kept with the original, effectively hiding the true sacred one in ‘plain sight’, a ploy to confuse any would be thieves. It seems the idea for his instruction may have come from his divine consort and councillor, the nymph Egeria.

o further safeguard the ancile (ancilia when relating to all twelve) the Salii order was created. These twelve priests were tasked with looking after the shields and they held the job for life, unless they chose to leave having been given another important ‘post’ in Rome. Their place of assembly was the Curia Saliorum on the Palatine hill, and they were named the Salii Palatini. [They are not to be confused with the Salii Collini who gathered on the Quirinal Hill. Originally, these were originally two distinct communities. N.B. The name Salii also occurs in other parts of ‘Italy’.]

On the 9th March the Salii paraded out of the Curia Saliorum. They were bedecked in a uniform which resembled a cross between a priest and a warrior.  They wore as short embroidered tunic, a bronze breastplate, a (red?) short cloak, and a pointed cap (apex). As well as carrying an ancile (sacred shield) they also carried as short staff which they used to beat the shield like a drum. They danced and sang the Carmen Saliari, their sacred song around the streets.

Of course, they couldn’t cover all of the streets of Rome in one day, so the shields were paraded around (probably on and off) during the rest of March. But that isn’t nearly the end of the story because the Salii were very busy on the 14th, 18th and 24th of March as well.

You can look out for more information on those dates, coming your way…very soon.

But for now celebrate, with me, the 9th of Martius.

Posted by Nancy Jardine Author at 23:28