The next festivals I'm making a mention of in this mini-series of really ancient Roman March Festivals are Mamuralia, Equirria and Anna Perenna.

The last post was about the Ancile - the shield that was revered as being absolutely essential for the continuity of Roman dominance in that part of the Mediterranean.

As previously mentioned, our current knowledge of these very ancient Roman festivals comes from legends and from the pens of writers who came much later in Roman history. Whatever the truth of any of the festivals, they were needed at a time to bolster up the mood of the communities who lived around Rome. Those ancient peoples needed something to cling to, to keep them going, when life was tough. Sometimes natural disasters happened and the blame had to be laid at someone's door. At such times, it was easier to claim the gods gave favour, or denied favour, to a venture.

Here's a little bit more about what happened after the Ancilia Festival of the Shields, which took place on the 9th March.

When the king, Numa Pompilius, ordered the eleven extra shields to be created  - to match the divine one that fell from the heavens - he chose a smith named Mamurius. Mamurius was, presumably, the best smith around and one who would be guaranteed to do exactly what was asked, someone who would honour the prophecy of the original ancile (shield).

As payment for the work involved, it's said that Mamurius asked that his name be one that was never forgotten. A way to sort this out was to include his name in a song that would be sung for centuries to come. The Carmen Saliare did exactly that. On the 9th March, when the Salii paraded the shields around the city, they beat the shields with a sacred rod, they danced a special military dance, and they sang the song/ poem Carmen Saliare which gave honour to Mamurius.  [A fragment of the Carmen Saliare still exists]

However, in the way of legends, there are often different versions of the same story as the years roll by. Ioannis Lydus (John the Lydian-early 6th Century)  had a slightly different slant to the tale. Instead of the twelve Salii priests beating the shields, Lydus' account is that on the 14th March, an old man (possibly wearing only animal skins) was chosen to be driven out of the state, and beaten along the route during the Mamuralia Festival. (Poor old guy. I hope he was deserving of such a fate)

A version also states that the old man in the beating process was Mamurius who was chastised by some soldiers/priests because they did not get the proper protection from the shield that they carried. (Presumably having believed they alone carried the divine shield)

Whatever the current story of the day, all those thousands of years ago, on the 14th March the shields seem to have been paraded again in the streets of Rome.

This Mamuralia taking place on the 14th March was unusual in that festivals generally occurred on an odd numbered date.

An intriguing reason is that the Mamuralia initially took place on the ides of March (15th), however there were already two other important activities on that date and a third major one was one too many. The two established 15th March events were the Equirria and that of the Festival of Anna Perenna. 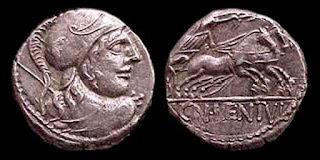 This was a chariot-racing event. (perhaps also with horseback racing?) It was one of two festivals of similar name that were held in honour of the god Mars, which were very popularly attended, the other date being on the 27th February. The Equirria were said to have been started by Romulus himself and were held in the Campus Martius, a public space just outside the sacred boundary of Rome (when not flooded). Because the pre-Julian Roman calendar started with the month of March, the Equirria festival of the 15th March was part of the new year festivities, whereas the one held on the 27th February was to 'close' the year.

She appears to have originally been a divinity who was lauded as the giver of life, of health, and abundance. Her goddess powers were most effective and evident during the return of spring, hence the ides (middle) of March being a good time for a celebration day for her. She was honoured at her grove at the first milestone on the Via Flaminia (a road from Rome over the Apennine mountains to the Adriatic Coast). The festivities may have been somewhat licentious (according to Ovid), but then probably many others were similarly conducted in high revelry.

One tale of the poet Ovid, is that Anna was a sister of Dido and Anna fled after Dido's death. To avoid her brother Pygmalian, she fled to Malta and was welcomed by Battus the king of Malta. When Pygmalian was seeking war some three years later, Battus recommended Anna flee again. Shipwrecked on the coast of Latium, she was protected by Aeneas. Unfortunately, she stirred extreme jealousy in Lavinia. (a recurring theme in fiction and mythology) The danger was so great that Dido appeared in a dream to Anna, warning her of the situation. The unfortunate Anna was then swept away in the River Numicius, after which she was transformed into a water nymph and hidden in the 'perennial' stream.

An interesting aspect of the Anna Perenna festival is that she is equated to the 'ring or cycle' of the year and is the origin of the term Per Annum- meaning once a year.

A slightly different version has her as the sister of Dido, and daughter of Belus. After her father's death she fled to Carthage where the king, Aeneas, welcomed her. All was not well when the jealousy of Lavinia was aroused. Dido appears to Anna in a dream, warning her of the perilous situation, whereupon Anna drowned herself in the River Numicius.

Virgil's 'Aeneid ' has yet another version!

There are yet more versions of why she was revered. One option has her as an old woman. When Mars fell in love with Minerva, he went to the old woman named Anna Perenna and asked for her help to seduce Minerva. Mars thought his request was granted when Minerva appeared before him. However, when he lifted her veil to kiss her, only scorn came his way because it was really the old woman, Anna Perenna, who was pretending to be the beautiful Minerva.

A further Anna story has the old woman giving away food to the starving around Rome, after which the thankful plebs built a temple to her in honour of her good deeds. This was at the time of the First Plebeian Secession, a time of conflict between the ruling classes and the commoners.

An aspect yet to be highlighted on this blog is that the March festivals were related to the new year, to the new campaigning season and to the readiness for such momentous events. More coming soon on this...

In order that the ordinary people of Rome got to grips with what festival was on which day, something like this calendar was carved onto the walls at street corners! How they coped with this minefield of festival days over the course of a year, is a mystery still to be solved by me. :-) 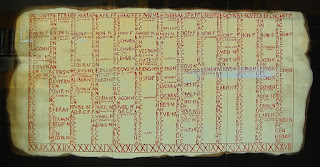 Raise a glass to the festivals held on the 14th and 15th of March!

Posted by Nancy Jardine Author at 18:02