US Trip #4 Hoodoos and Shadows of Bryce Canyon


There are many wonderful vistas around the world, all of them spectacular in their own ways - however, the Hoodoos of Bryce Canyon, Utah, are breathtakingly unique. They are the disturbing, poignant, sentinel and colourfully reflective forces of nature.

I’ve viewed the scenery over many different cliff tops- looking down into crevasses, valleys, rivers and seas - but none have had the utter scale, magnificence and imagination sparking Hoodoos of Bryce Canyon.

, one of 407 around the , sets out to preserve the natural and cultural history of the area and yet preserve isn’t actually what is truly happening. The landscape beneath the rim of is naturally and constantly changing itself as wind, weather, and heat from the relentless sun erodes the natural rock stacks named HOODOOS. The geological features of , which stand watching like sentinel beings are ever changing. Walk slowly along the rim and the sight below alters as the sun’s angle shifts on the irregularity of the Hoodoo pillars. Pick out features from one particular spot- like the trio which seemed to resemble the carvings on walk some ten paces and that image is lost! A new possibility immediately takes its place. I tried to interpret the areas evocatively named Thors Hammer; Queen ; Wall Street; The Cathedral; ; The Alligator - but instead, I saw other images.

Hoodoos are formed from narrow walls which have appeared out of the cliffs. At first it’s a thin wall of irregular stone named a FIN. Frost, snow and summer suns crack and wedge into the fin and create holes or windows. As more erosion takes place the windows enlarge to such an extent that they reach the top of the fin and the upper rim collapses leaving columns. Rain and snow melt erodes and sculpts these limestone columnar pillars into bulbous spires named Hoodoos. The constant and gradual forces of nature means as new Hoodoos emerge others will flatten and become reduced to lumps of clay.

The visitor quota to is huge, as numerous as the stacks below, but the Park Ranger service have it well sussed out. Drive your car to one of the dedicated car parks a few miles away at Bryce Canyon City, pay the flat vehicle fee of $30 to enter the National Park regardless of the amount of passengers and hop on the ‘Free’ shuttle bus. The shuttle buses run every ten minutes from 9 a.m. to around an hour before the park closes, though the park is open from 8 a.m. during the summer season. You can choose to drive your car around the park to visit the numerous viewing areas but the shuttle bus is a pleasant ride - it conserves fuel; reduces traffic and congestion since the car parks are smallish considering the visitor numbers run into around 1.5 million over a season.

The views down into are aptly named ‘amphitheatres’, there being a main amphitheatre and some other subsidiary ones around the park. Last April, 2016, I visited the amphitheatre of the Colosseum in and thought it magnificent but it covered a tiny area compared to the vastness of the amphitheatres of .

Since our time was limited to a couple of hours, we focused on a few of the viewing points of the main amphitheatre. These have wonderfully evocative names, though we were clearly not quite seeing the scenery at the best times of the day. We took the shuttle bus to Inspiration Point to admire the canyon from a southerly direction.


At this viewpoint you are at an elevation of 8,100 ft and I thought myself seriously unfit for the short but quite steep climb up the path to the barricaded viewing platform though I’d forgotten that the air would be a bit ‘thinner’ than I’m used to. Those first views were breathtaking. No words fit as I took in the scene below. The best adjectives have all been used too glibly but the land below the rim is truly AWESOME.

Sunset point was our next shuttle bus stop, though it was around 10 a.m. The views at that time of the main amphitheatre were stupendous but I can imagine that the sunset shadows would make that vista even more magnificent.

We chose to walk along the rim edge to the next northerly point at Sunrise Point- again not at that time of day but still incredible. Walking the rim is easy enough but as there is no barrier to prevent a drop of around 1000 ft, people sensibly steer clear from the very edge. There is a pathway down to the canyon bed which appealed a lot but the round trip trails around the foot of the Hoodoos take a good few hours, not to mention the steep climb back up again so, having limited time we declined to visit the lower pathways. My daughter and her husband cheated and went down a tiny bit to see the Hoodoos from a lower perspective.

I thoroughly recommend a visit to Bryce and would go back there in a blink. was in the nature of a pilgrimage for us because my late brother-in-law Neil had visited many years ago and enthused about it so much. As a geography teacher, he knew all the geological terminology and declared that Bryce was much more impressive than though he managed to see that, too. We had time to visit only one canyon and I’m so glad we chose Bryce.

There is nothing quite like it anywhere else in the world....except maybe the rest of the 130,000 square miles of the Grand Staircase of the Colorado Plateau.

The leaflet given as part of our entry price to is as descriptive as any I’ve found on the internet. You can see that the colours across the massive stretch of land vary in shades and intensities depending on the constituents of the actual rocks. The pink cliffs, basin and rim of Bryce Canyon is effectively the highest STEP in the Grand Staircase of the Colorado Plateau which straddles the four US States of Utah, Colorado, New Mexico and Arizona.The upper left of the image is the Grand Canyon and near the top right is the Zion Canyon.

It truly was AWESOME by day but, I think, it must be eerily scary at night!

Imagine this tree in the dusk with its tentacle roots clinging tentatively along the edge... or maybe shifting a little along the rim? !! 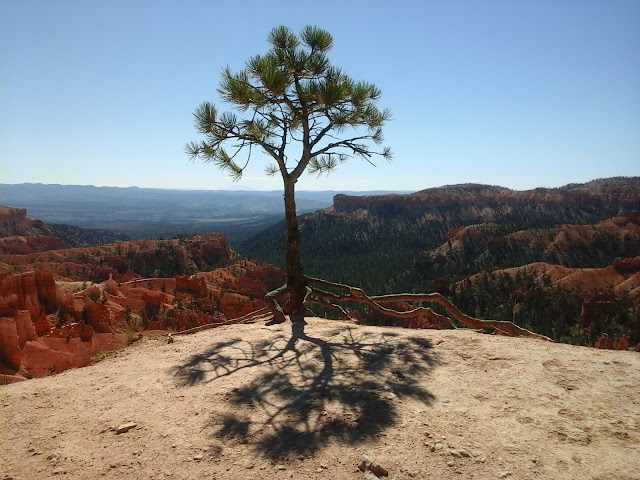 Check in soon for some images of our drive through Zion National Park as we wended our way from Bryce Canyon back to Las Vegas via Zion.