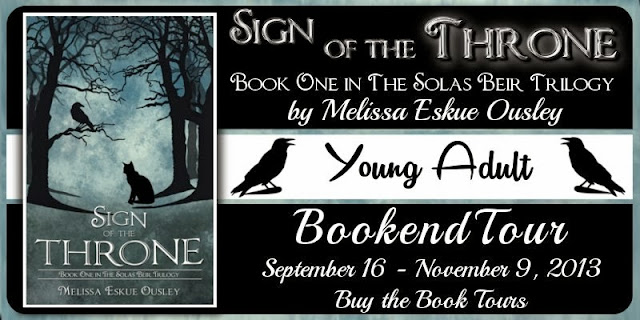 Welcome Wednesday says hello to Mellisa Eskue Ousley, author of Sign Of The Thrones which was recently published by Castle Garden Publications on the 14th September 2013.

There's a fantastic *GIVEAWAY* - read on for the details.

Melissa's come armed with great information about her writing. I don't know about you, but as a child, I was warned to beware the bogeyman or dire things would happen. Here's what Melissa has to add about that...


In Sign of the Throne, Abby Brown has a close encounter with a terrifying shape-shifting creature that first appears as a shadowy goblin boy and then changes into a black cat. She later learns that this bogeyman is one of the Kruorumbrae, vicious monsters that feed on the fear and life force of other living creatures. The inspiration for the Kruorumbrae, or Blood Shadows, came from Jung’s concept of the collective unconscious and the idea that mythology is very similar across various human cultures. In researching mythology, I noticed that monsters in legends from all over the world share similar traits. I imagined these stories were reflections of the same creature, one that originated from another world.

There are many legends about bogeymen, some of which have shape-shifting abilities. The phooka is a hobgoblin that often appears in Irish folklore as a trickster that can appear in a number of forms: a shadow, smoke, or animals with black fur, including cats, rabbits, goats, and bulls. Although it can be dangerous, it is generally considered benevolent, warning humans of impending danger and pulling harmless pranks. In South America, there are similar myths about shape-shifting creatures that appear as jaguars. In Western history, the black cat was said to have the power to shape-shift, taking on human form as a spy for witches or demons. Another shape-shifter, Oude Rode Ogen, or Old Red Eyes, from Belgium, can change from human form to that of a black dog, and is thought to be cannibalistic. A similar monster can be found in Mexico. El Cucuy is thought to kidnap and eat children who won’t go to bed. Many of these creatures seem to take up residence in dark places. The talasam from Bulgaria prefers making a home in places where it is less likely to be disturbed, such as basements, attics, or even caves.

In almost all of these stories, the message is cautionary: behave or the bogeyman will steal you and eat you.  It’s a nightmarish idea—to be harmed when you are at your most vulnerable in a place where you should be safe, sleeping in your own bed. It speaks to our common fears as humans, combining our dread of the dark, strangers, and the unknown, manifesting in a shape-shifting shadow. In writing Sign of the Throne, I asked myself several “what if” questions. What if all of these bogeyman legends weren’t just stories? What if there is something more to these tales than our collective human fears? What if the creatures are real, and the reason they seem so similar is that they all originate from the same place? The answers await discovery in the magical parallel realm of Cai Terenmare. 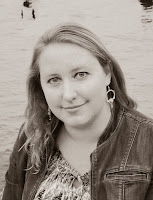 Melissa Eskue Ousley is the author of The Solas Beir Trilogy. “Sign of theThrone,” the first book of this young adult fantasy series, will be released on September 14. She is currently working on the second and third novels in the trilogy, “The Rabbit and the Raven” and “The Sower Comes.”
Melissa lives in the Pacific Northwest with her family and their Kelpie, Gryphon. When she’s not writing, Melissa can be found swimming, hiking, kayaking, scuba diving, or walking along the beach, poking dead things with a stick.
Before she became a writer, she had a number of educational jobs, ranging from a summer spent scraping roadkill off a molten desert highway to years spent conducting research with an amazing team of educators at the University of Arizona. 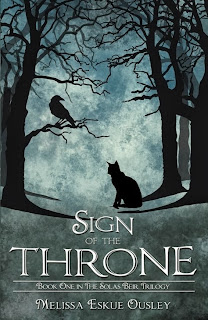 Abby is an ordinary girl haunted by dreams of an ivory castle, blood-thirsty monsters, and a striking stranger. Working as a babysitter for a family of mythology lovers in wealthy Newcastle Beach, California, she struggles to define herself among the elite class while trying to make sense of her strange visions. Upon meeting David, the doppelgänger of the mysterious young man in her dreams, Abby’s life is changed forever.
Encountering the queen of Cai Terenmare, a magical kingdom in a parallel world, Abby learns of an evil lord hell-bent on usurping the throne, the murder of Cai Terenmare’s king, the Solas Beir, and the kidnapping of the Solas Beir’s infant son.
As the kingdom struggles to endure, the queen shows Abby the full extent of her destiny. She must convince her mysterious crush, David, that he is the lost heir. While braving attacks from the dark lord’s sadistic minions, David must realize his true identity and return to Cai Terenmare to claim his throne before time runs out, lest the evil that was temporarily locked away be unleashed, threatening to destroy both the kingdom and all of humanity.

Sign of the Throne  Amazon {Paperback} | Amazon {Kindle}  | Redroom
*Giveaway*
$15 amazon or B&N gift card.
10 x winners of a signed copy of The Sign Of The Thrones


Gail's sharing a teaser excerpt for us today:


Abby spent the next evening babysitting for Cassandra and Riordan. She put the kids to bed and laid out her homework on the coffee table downstairs. She was immersed in her work when she realized—the house was quiet. Eerily quiet.

She was used to the familiar creaks and groans of the old house, and night ushered in the occasional chirp of a cricket or flutter of moth wings around the antique sconces lighting the room. Tonight she heard nothing—there was only dead silence. She felt a prickle at the back of her neck and realized she was shivering. The room had gone unnaturally cold, and she had the distinct sense that she was not alone.

Out of the corner of her eye, she saw a shadowy presence, someone standing still, watching her. She turned to look, but there was no one there. She felt a terrible unease twisting in her gut. Something was wrong.

Responding to her intuition, she got up and climbed the stairs to check on the children. Ciaran was snoring, perfectly at peace. He had wriggled out of his covers in his sleep. Abby tucked him back in.

Leaving his room, she walked down the hall to the twins’ room. The nightlight in the hallway began blinking erratically. She entered the room and froze. Perched monkey-like on the corner of Rowan’s crib was a shadowed figure the size of a small boy, leaning over the sleeping child. Sensing Abby, it turned its head, blood-red eyes meeting hers.

Abby gasped with horror as the creature leapt with unnatural agility from the crib and crouched like a spider high on the wall, staring down at her. Slowly, it smiled, revealing rows of pointed narrow teeth, sharp as razors. And then…it pounced.

Abby raised her arms to shield herself, scrunched her eyes shut, and screamed. But there was nothing. She heard a low chuckle behind her and saw the creature near the door. The shadow boy laughed and ran out. The smoky form changed into a large black housecat before disappearing through the hallway wall.

Abby ran to the twins’ light switch and turned on the lights. She checked to make sure Rowan and Siobhan were unharmed, and then hurried to Ciaran’s room, flicking on lights as she ran. Ciaran was still fast asleep—her scream had not disturbed him at all.

She jerked open his closet door and found his aluminium baseball bat. Then, scooping him and the quilt up from his bed, she ran back to Rowan and Siobhan’s room. She shut the door and nestled the five year old into a make-shift bed on the floor. Sitting against the dresser next to him, she hummed, trying to reassure herself. Armed with the bat and the adrenaline coursing through her body, she waited.

Thank you for visiting, Gail. My very best wishes for a successful launch tour.