The Festival of Lemuria

Ancient Roman Festivals in May

Continuing with some of the Ancient Roman ones... 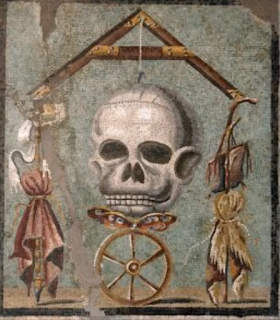 Being very superstitious people, and ruled in their daily lives by multiple gods and protectors, the people of Ancient Rome were scared of the Lemurs, the spirits of departed family members who returned and wandered around the household on May 9th, 11th and 13th. Some of these were considered to be ones who were ‘good’ in life– the lares. And the angry, evil ones were the larvae. (not sounding so pleasant) This included the ghosts of slaves since they were regarded as family property. Needing something to help them allay their worries, the Ancient Romans created rituals to appease the angry /evil spirits, to ensure them all was well and that the spirits should just go away and not bother the living.


Rituals included walking around the house barefoot. There are a few versions of the following ritual. The pater familias, the head of the household, got up at midnight (if he had already been abed) and wore clothes without knots, presumably ruling out tunics that tied at the shoulders. Why? Perhaps no spaces that the spirits could be entrapped in?

The pater familias washed his hands with purified water and then walked through the house complex without looking backwards while making the ‘mano fico’ sign. This was an ancient rude gesture, a protection against the evil eye. [See site HERE for details]

On his walk around the house the pater familias spat black beans out of his mouth (or threw them over his shoulders) interspersed with repeating a prayer chant nine times. “These I cast; with these beans, I redeem me and mine."

Other household members, meanwhile, clashed metal pots and pans and importuned the spirits to depart. The noise, it was hoped would chase away the spirit. Why black beans?  It was hoped that the spirits would pick up the beans instead of claiming any souls from the live members of the house. Only at the end of the ritual would the pater familias look backwards to ensure no Lemures/spirits lingered. Can you imagine the furore if some were still behind him?

Sacrifice to Mania – 11th May

This is more difficult to research but it seems to have been a sacrifice perhaps more prevalent during the earlier Republican era, but one which was abandoned when human sacrifice became frowned upon. The Ancient Romans claimed to abhor human sacrifice but some of the practices they performed were somewhat more subtle.  Throwing hermaphrodite children into the River Tiber and leaving them to a watery fate,  or  burying alive Vestal virgins who indulged in sexual encounters, didn’t count as sacrifice. And other things like that! It is thought to have been rare yet it is documented that babies (probably boys) were sacrificed to Mania, a goddess of the dead, to ensure the prosperity of the family. In later times, the ritual only included garlic and head of poppies as offerings to Mania. Why those things? I’m afraid I haven’t yet found out. Manioe, wooden dolls, were hung on doors as a protection.

In the goddess form of Mania Genita, a dog was sacrificed in order that the goddess would ensure everyone in the family remained ‘good’ i.e. not claimed by her in death. As time evolved, little children were threatened with Mania –in a  similar way to the ‘bogey man’ who would snatch naughty children.

Mania might also be equated with Lara, Larunda, or Muta ( a dumb one). Lara, daughter of the river-god Almo, had her tongue removed because she had betrayed Jupiter, having told people of Jupiter’s love for the nymph Juturna. Lara was condemned to be the nymph of the marshy waters in the land of the speechless.

In many ways I’m also speechless. I think it must have been pretty difficult to have lived in Ancient Rome and to have been ruled by the constant superstition,  daily and monthly rituals.

Posted by Nancy Jardine Author at 08:29