Happy Beltane greetings to all!

You will read other spellings of this ancient Celtic festival which marked the end of spring and the official beginning of the summer. (see other posts about Beltane on this blog)

Beltane literally means shining/bright fire and for the ancient Celtic tribes of Britain, the rituals of Beltane appear to have heralded a time of optimism and hope that the coming seasons would be fruitful for the land, the animals and the people. Abundant crops and productive animals were crucial to survival, living off the land the way of life as most Celtic tribes were farmers, and many of them subsistence farmers. The rituals of the festival were therefore designed to encourage successful growth for their animals and crops and to rid them of potentially deadly diseases. The blackness of winter is banished, the warmth from the bonfire flames emulating what is to come from the summer sunshine.

It also had a significance for the fertility of the tribes, a purification and dedication to renewal and rebirth. Celtic tribes appear to have marked the passage of time in nights rather than days and Beltane begins on the eve of the 1st of May which is approximately half way between the Vernal equinox and the Summer Solstice. Stargazers like to seek out the group of stars named The Pleiades when it rises just before dawn (sunrise) at Beltane.

In my novel The Beltane Choice, there is a Beltane scene where my Garrigill Clan pay homage to the sun god, Bel, to bless and protect the tribe. Nara of the Selgovae is at first a very unhappy participant at this ceremony, since the plans of Lorcan of the Brigantes has gone awry. The reader will need to read the result in the novel since I give no spoilers here!

Beltane traditions have come down to us in different forms. Like a Yule festival tradition, some have claimed that on Beltane eve the household fires were extinguished and they were relit from the Beltane bonfires-physically and not symbolically in ancient times. And like the festival of Samhain (now Halloween), Beltane was also a time when the veils between the worlds of the living and the dead are at their thinnest. This 'window of a few hours' allowed the spirits to intermingle with the living.

The Celts are said to have been very superstitious people and a rowan tree was planted near the threshold of the roundhouses/ houses for protection against malignant wandering spirits. To this day many Scottish people will not cut down a rowan tree and should their rowan tree die, they will plant another in its stead. I have a very old rowan on the drive near my house that isn't at it's best but I will never cut it down!

During the coming month of May, look out for more short posts on other May festivals that were celebrated by the Celts, and by the Ancient Romans.  In addition, I'll be posting an extract from my time travel novel The Taexali Game which also features a Beltane Scene, though the purpose of writing about the Beltane festival in The Taexali Game is quite different from in The Beltane Choice. 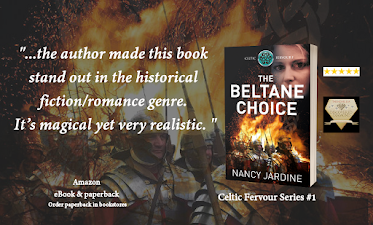 p.s. The Beltane Choice is the Book of the Month for May 2021 at Ocelot Press and will be 99p for the whole month, and the other four books of the series will be reduced to £1.99. You can buy them HERE

Enjoy your reading... and Beltane!

Posted by Nancy Jardine Author at 10:14