Good Morning and welcome to February, the 1st of February being the Festival of Imbolc. 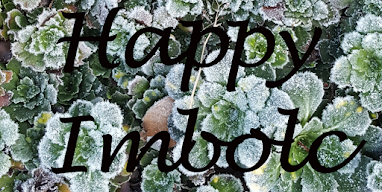 In the ancient Celtic calendar, Imbolc was one of the four main festivals of the year and heralded the end of winter and the beginning of spring. For me in my part of Scotland, my winter is rarely over at this time and the signs of spring can pop up around me at vary variable stages, depending on what the winter has been like.

We often get snow around mid-February, and indeed may well have some snow during the coming days of early February this year of 2021 - according to th latest weather reports. At present it's a frosty morning, one of a series of hard frosts, but the day is yet young.

I've not been blogging during January but I have been doing some writing; lots of research reading; and I've been helping to home-school my grandkids during our current Covid 19 lockdown situation in Scotland. Their home-schooling is set to continue for some weeks, presently with no time given for a return to the classroom so my writing time is very flexible.

I've been addressing the issue of the lack of historical background in The Beltane Choice, a few reviewers saying that they'd rather have had a better, more firm, Roman Britain context for Book 1 of the series.  My prequel is coming along - though it's not a technique I've tried before -  and is slowly developing. Since I wrote book 1 of the series more than a decade ago, the final version and first publication being in 2012, I have to keep referring back to ensure I'm not repeating what happens in Book 1 but that the events created happen before Book 1 action!

it is fortuitous that the beginning of Lorcan's story happens at the Festival of Imbolc. (Nara's will also be included in the new prequel)  What you can read below is a draft version, unedited and as yet not yet read by anybody!

It's AD 71 and the events in Brigantia are beginning to change with the new arrival of the Ancient Roman General Cerialis, who is the new Governor of Britannia.

“Lorcan of Garrigill!” Cynwrig declared as he sped down the room in welcome. “It has been a while since we spoke together…” The chief broke off his greetings.

“I can see your journey here has had its moments, but since you are still standing on your own two feet, you can explain your disorder later.”

Lorcan absorbed the hearty clasps at his shoulders, knowing they were genuine ones, but winced when a new bruise was inadvertently thumped. His attempt to return the easy grins of Cynwrig – a man he was more than happy to name as a good contact – was stiff and awkward, his cheeks frozen with cold and other traces he did not care to acknowledge.

“Your timing is not the greatest, my friend, since we have already eaten the best of our feast but my hearth is yours for as long as you need it to be,” the chief declared before he accepted the snow-clad spear Lorcan held forth in front of him, the tip purposely pointing towards the roof timbers and not in any way a threat.

Also accepting Lorcan’s sword in its leather sheath, Cynwrig plopped the weapons into the half-empty iron rack, at the side of the door. Lorcan then felt himself being urged away from the doorway.

“With the conditions sent to us today, by the god Ambisagrus, and whatever else has befallen you, your stay might need to be longer than you planned.”

“Aye. Time will tell about that.” Lorcan was slow to slide free the pin of the circular brooch that held his cloak together at his shoulder, his fingers so chilled he could feel almost nothing. “I thanked your local god Ialonus, many times, that he had seen fit to allow me to almost reach you before this snow started dumping down in earnest.”

He stopped speaking to swing the white-encrusted wool off his shoulders, taking care to keep it from showering onto his host. “Thankfully, Ialonus also kept at bay squally winds, otherwise my arrival might have been completely thwarted.”

A raucous bellow from Cynwrig agreed. “My favoured god favours you, then. You must indeed have good news to share that I need to hear. Are you come to tell me that those Romans have yet another new emperor?”

“Nay.” The smile that broke free was a painful one for Lorcan. “I am not at all sure that would be good news.”

Cynwrig’s soft fist to his shoulder was predictable. “Ah! You disappoint me, my Brigante friend. That would at least be more amusing than the real news.”

I hope you enjoyed this tiny glimpse into Lorcan before 'The Beltane Choice'.

Posted by Nancy Jardine Author at 09:19