A peculiar UP or DOWN?


Happy Saturday to you!

For centuries, people have said “I’m going UP to London” but this phrase didn’t hold much water with my father. Fervently Scottish, born and bred in Glasgow, my father thought that was a very silly thing to say. He always claimed it was impossible to go UP to London if we were going SOUTH to do so. It’s one of those situations that still causes some controversy. For people who live in the north of the British Isles, it seems impossible to travel south and also be going UP.

Of course, the historic use of the phrase “going UP to London… to see the Queen” wasn’t important to my dad. He wasn’t in any way inclined to the monarchy and the idea of seeing the queen wasn’t an ambition of his. However, he was a very polite person and I have no doubts that should he ever have inadvertently been in the company of the queen, for whatever reason, he would have spoken to her as to any other person he met.

Growing up, I was curious about the whole affair and going Up to London to see the queen was quite an intriguing thing to do. I made a visit to Westminster Abbey for its 900th centenary celebrations to sing with the massed Girl Guide Choirs (you’ll find a post made about this on this blog) but was disappointed that the Queen was not attending. As patron of the Girl Guide Association, it was Princess Margaret who was there as the representative of the Crown.

Subsequent visits for me have always meant travelling south to go to London and I have always referred to my trips as going DOWN- even at the risk of the stares which came my way. On Thursday 12th March, I flew DOWN to London. I’m presently in the county of Hampshire, not too far from Central London, to attend a 70th birthday celebration of one of my husband’s oldest friends, an ex-colleague of many years ago that we’ve kept in touch with over the last four decades. Flying down on Thursday gave us a free day to visit central London yesterday (Friday) the party being on Saturday night. Not much time, but just enough to visit some of the plethora of tourist spots.

It may not come as too much of a surprise that my first stop was The British Museum. Last year, on another short trip, I visited The Victoria and Albert Museum to see its fabulous collections. Yesterday my focus was Room 49 which houses the Roman Britain Collection. With a narrow window of a couple of hours, I managed to view that collection and had a fleeting glimpse of some others that I must revisit to see properly.
What makes a short visit to such a fantastic museum seem viable is that the main museums of London (and indeed around Britain) have FREE entry- unless you are viewing a special collection, or a travelling collection from another lending source like maybe the Metropolitan or another European museum.

There were so many exhibits in room 49 that I’m sure I can use in my blog writing for my Celtic Fervour and Rubidium Time Travel novels. It’s possible to take photographs (non flash) of most of the displays with only a few exceptions which are in special areas.

They also have some fabulous books that can be purchased from the Museum shops. My book buying budget has just taken a huge dent!

After my foray at the British Museum, my husband and I had fun travelling on the London Underground railway to the Tower of London. Having looked at the map, a walk from the British Museum to Tower Bridge was possible, but since it was already late in the day we opted for the Underground. As it transpired, since many of the Underground lines are so many levels below ground, we had to change ‘lines’ and negotiate the multitude of corridors, stairs and escalators to reach our destination. Fun –definitely- but maybe not shorter, or quicker, than walking between the two areas.
http://www.hrp.org.uk/TowerOfLondon/

It was too late in the day to make a £25.00 entry ticket to the Tower of London worthwhile, since it closed at 5.30 p.m., so we opted to walk along the riverside. That was a great choice since the weather was cold, though dry and not too windy. There is probably no better way of appreciating the views of the River Thames and the variety of buildings which adorn its banks.

Glass buildings of many shapes and sizes vie with the older, and generally much lower, stone buildings. From Tower Bridge the view up and down river was very clear, the Tower Bridge area full of pleasure tourist boats, some barges chugging their way upstream and a good chunk of the skyline taken up with the HMS Belfast. The HMS Belfast, a ship used over many years from World War II onwards, was decommissioned some time ago and made into a visitor attraction. More information here  http://www.iwm.org.uk/visits/hms-belfast

Friday in London, on a pleasant March day, was most enjoyable. 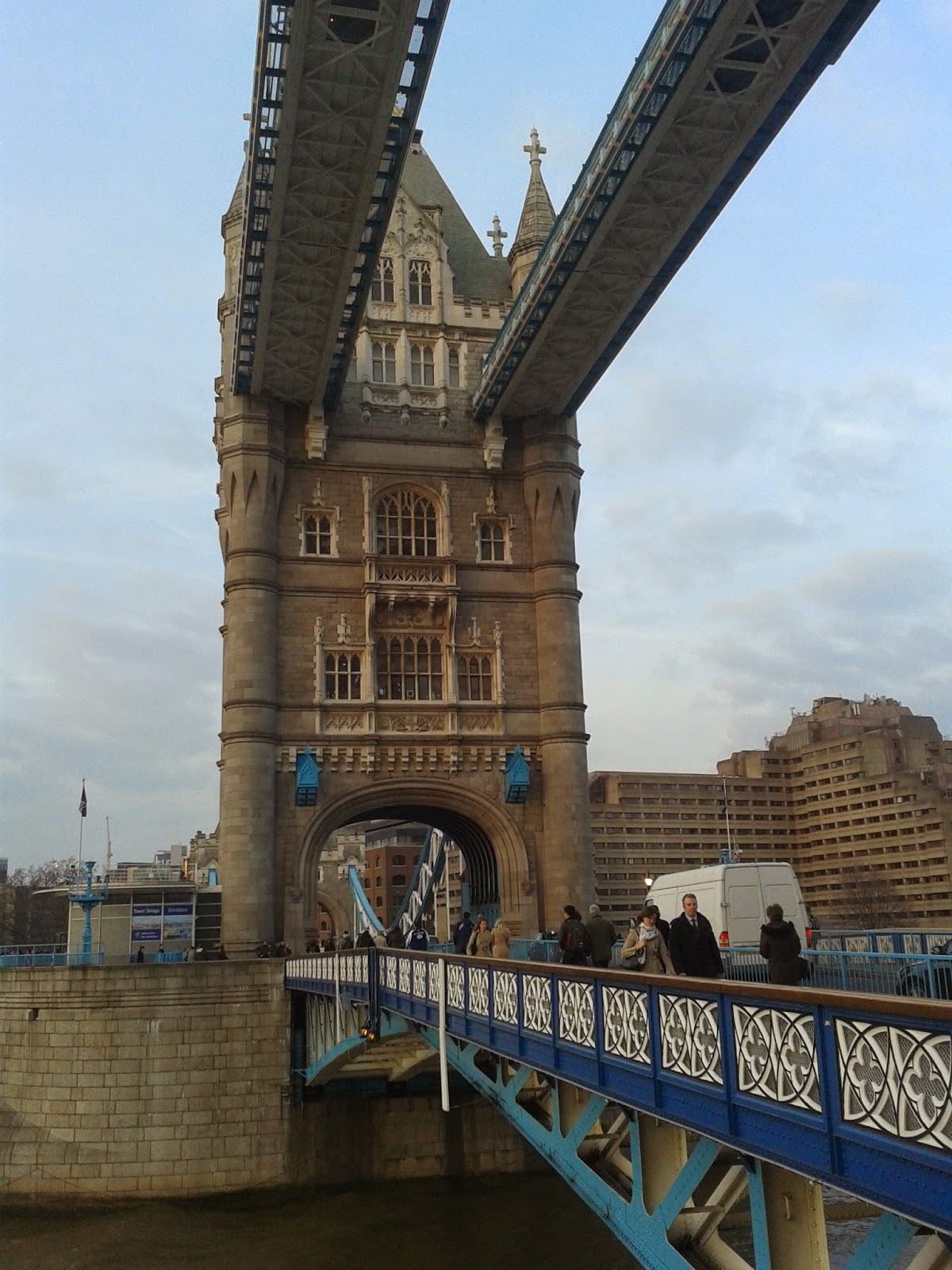 Now I’m off to party!

Posted by Nancy Jardine Author at 12:15