There's been a lot going on in my life just now with birthdays, visits away from home, new novels to be launched very soon, a viral infection that's still knocking the stuffing out of me....and there's that house appearing right next to my own.

It's been a couple of weeks since the last post on the house that my daughter and son-in-law are having built on what used to be my own back garden.

The last stage I wrote about was the infill to the foundations which was then left between the 7th March and the 17th March.

That didn't meant that nothing was happening. The whole process of making the building phases sync together are dependent on having a great project manager and in making sure that the planning permit  issues are addressed at the correct times.

An unannounced visit to the site was made by a representative of the local council building/planning department who declared he was happy with the way the site was tidy, well laid out in terms of building materials being stacked neatly in one area and that the whole site was safe and protected by the wire fencing.

The next stage was done on the 17th March when the sub-floor insulation boards were laid. These specially constructed boards will prevent dampness seeping through the concrete flooring and should effectively seal out any spores or moulds which could creep up from the earth> hardcore> soft core bedding that's below the site.
The 18th March was a fun day! The site manager alerted us that the laying of the concrete flooring might be interesting to watch. He wasn't wrong!

Up the driveway came 2 large vehicles. The first of these was the specialised 'crane' fed concrete 'tube' - the white machine seen in the photo on the left. (I apologise for lack of time to ferret out the technical name for the vehicle.)

This extremely expensive piece of machinery fed sufficient concrete down a feeder tube for the whole floor area. The concrete mixer had to fill up twice, meaning a slight delay while the mixer went off to be refilled, but the total time taken to lay the concrete was only around 15 to 20 minutes. The deep layer of concrete filled the gap between the insulation boards and the the top of the foundation blocks.

The squad of 5 men (who I believe are based in Kilmarnock, Ayrshire) move around sites all over Scotland to do their very fast concrete laying. Only excellent project management meant that my daughter's site was at the correct stage for the concrete to be laid while they were in my area of north-east Scotland. Many thanks are due to the project manager for the way things are happening with very short time gaps in between work on the site.


On arrival the white vehicle was archored into place via extender legs like a spider, to enable it to deliver the pressure fed concrete in a stable manner.

That was followed by the concrete mixer- the yellow vehicle - which fed the concrete from the mixer 'hopper' into the white vehicle's tube system.

One man stabilised and directed the tube (man at right wearing yellow reflective jacket) so that the concrete was plopped down correctly and neatly avoiding splashes on the blocks of the foundations. This 'tube directing' needed a strong operator because the concrete was coming out of the tube at a fast clip! Letting go of that tube wasn't an option or the conrete would have been spewed everywhere and to all the wrong places.

Not seen in the photo was a crewmember who used a remote control to monitor the crane movements, the controller anticipating where the tube needed to go next - always one step ahead of the  concrete falling out from the tube.

What's that? A pallette knife? The rest of the crew were using flattening/ smoother appliances to smooth the concrete into place and to ensure it filled to the correct depth. After only a few smoothing moves with their large spatulas water was sprinkled over the already hardening surface and smaller 'smoothers' used to make the surface have a very flat, smooth shine!

Once all sections were filled the smoothing lasted only a short few minutes and then ...it was all over!

When I see the photos with the men on what will be the floors of the downstairs rooms, the whole project area looks so small but I'm looking foward to finding just how that persepctive changes when the rest of the building rises above these foundations.

The concrete floors were hosed down once (that I know of) in the ensuing couple of days to make sure that the concrete firmed perfectly.It was then lightly covered to keep the expected rain off the surface.

The squad of 'concrete layers' were slick, leaving their work area hosed down and I guess those workboots got a hose down too, except I didn't see that!

Did my grandson enjoy watching? He certainly did, though it was the concrete mixer that impressed him the most!

I'll leave you to decide that one. 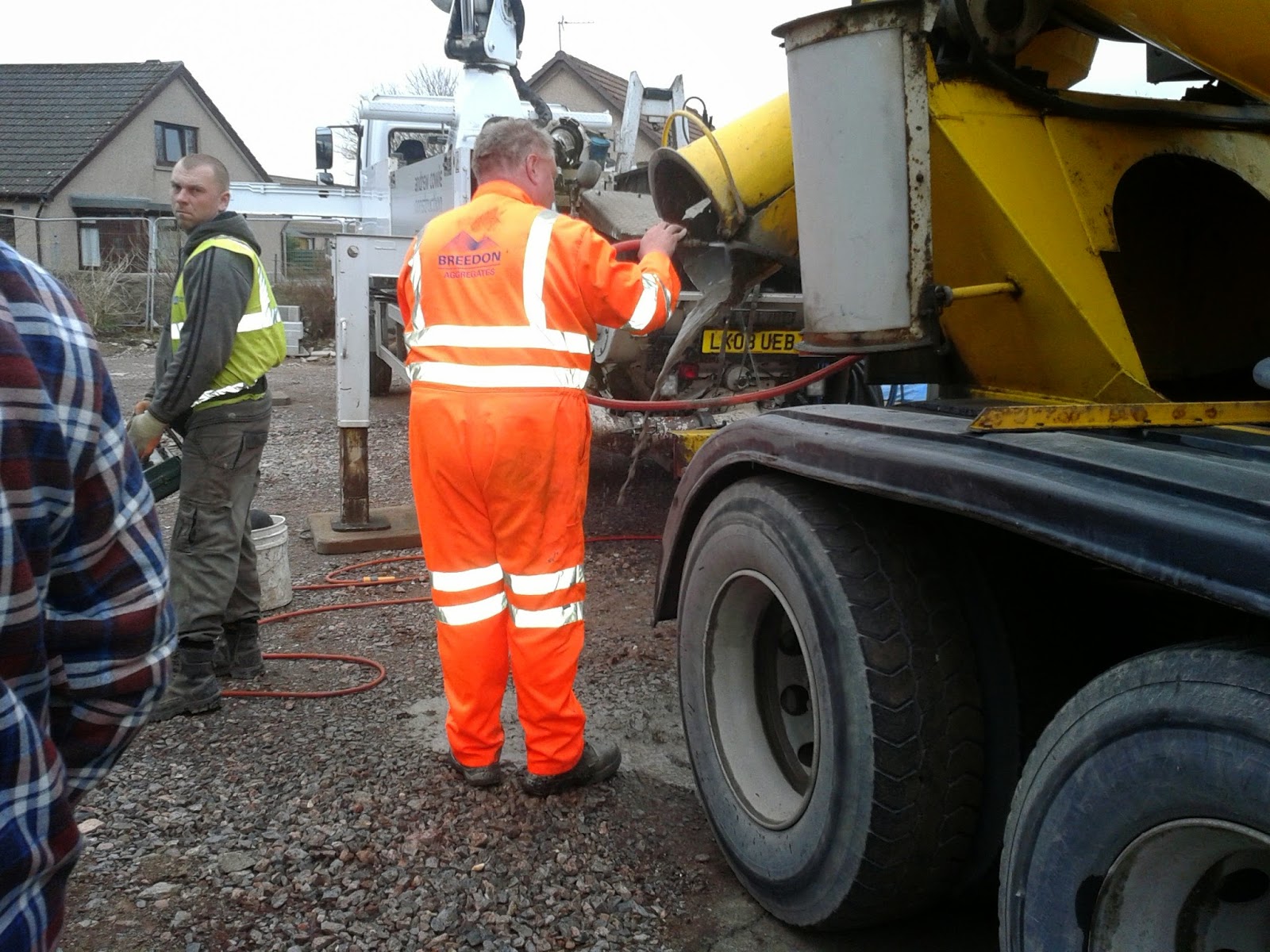 The other one in reflectives was the guy with his finger on the buzzer, the one who drove the remote control for the pourer!

The crane is being folded back down into place on top of the vehicle, the concrete mixer having down its job and gone off to somewhere new.

This is what makes the machine quick and slick and, I imagine, able to feed into the most awkward of sites- which ours isn't!

The next stages of building will come soon, and I can hardly wait for all the exciting things happening in my life just now!

More supplies arrive at 7a.m. on the 20th March!

Now...that reminds me of  Monogamy Twist when Rhia Ashton finds building supplies are passing her cottage door at well before 7a.m. heading up to renovate Greywood Hall.

Look out for an excerpt tomorrow from Monogamy Twist!  There are only 5 more days to go till launch day.

Posted by Nancy Jardine Author at 21:55