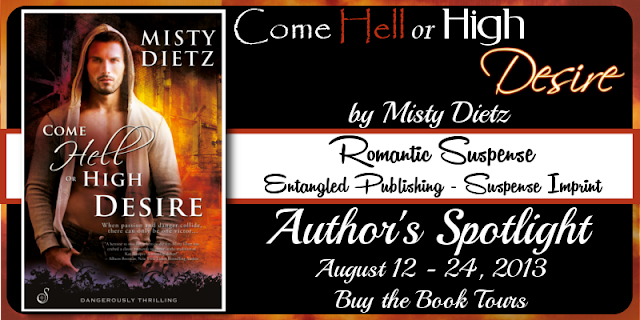 Monday Moments has a lot to share with you today. There's a guest blog, an excerpt and a chance to win some lovely swag items!

Read on to find out how you could be a winner.

I've invited Misty Dietz, author of Come Hell or High Desire,  to pop in and give us a taste of North Dakota.

Now, as a Scot you might think I would have only heard of that area of the US but you would be wrong! Some 33 years ago I had a holiday in Minnesota. My husband, daughter 1 (and daughter 2 still in-the-womb), and I travelled from Rochester (Minnesota) up to Winnipeg in Canada. We drove through North Dakota and for some of that time we followed the Red River that Misty is about to speak of....

My Favorite Bodies. (Not what y'all think.)
by Misty Dietz


Hi gang, I’m happy to be joining Nancy today! Thanks so much for taking time out of your day to talk about the mystique of…water! (If you were hoping this would be a sexy talk, keep reading, we’ll get a smidge sexy as we go. ;)


So, my fascination with water has been a life-long thing. Oceans, lakes, rivers, even tiny little streams that whisper with the softest tinkle like a fairy laugh… Water draws me in like a lost person suddenly found. I feel at home by the water and am at my most relaxed when in its presence.

In fact, I appreciate it so much that I set part of my debut COME HELL OR HIGH DESIRE on the banks of the Red River in North Dakota.


Now, you might be asking yourself, why the hell should I care? Good question!


Here's the deal. I know I'm not alone. Most people I know enjoy water. If not actually being in it, they enjoy the scenic beauty of it and the serenity it offers. And I've come to the conclusion that it's pretty much programmed into our DNA.


I've come up with a few hypotheses to support my assertion.

1. That which we don't understand.


There is literally a whole world under every surface of water. A world from which we're usually excluded. Think of the depths of the oceans. Freaking miles down where it's so dark that sea creatures don't even have any pigment because they don't need it. Scary in a way. But also...darkly fascinating.


Lakes have their own eco-systems and culture. The wildlife, the recreation, the lifestyle you have when you’re at the lake. Even streams have stories to share if you sit a while and listen. It's an alien water world, yet our brains want to know more.


It’s like the quietly charismatic man standing on the other side of the room at a party. You just want to hear him speak because you know there’s some compelling stuff behind those intense eyes. *swoon!*


This one is kinda woo-woo, but hear me out. Before our birth, water is all we know in the womb's darkness. It was a time when all our needs were automatically met. We were safe, warm, and nourished. Is it such a stretch to wonder if we don't - on some primitive level - feel the urge to return to water?


We can't. Live. Without it. Same goes for every other living thing on earth.


When it comes to tactile experiences, water pretty much takes top billing. The feel of its cool refreshment as it hits your tongue and slakes your thirst. The melting of your bones when you sink into a decadent bath or rejuvenating hot tub. The steam rising off the still-warm lake on a chilly fall morning. The exhilaration of that first ocean wave crashing into your body, reminding you how small you are, the salt bitter on your tongue and crisp as it dries in your hair. The dramatic gushing of a spring rapid, bloated with a rapidly melted snow pack. Deafening and inspiring.


Water hits all five of our senses like a crash course in “being present.” Here I am, water tells us. You know me.


Indeed. And I, for one, feel lost without its frequent immersion.

How about you guys? What aspects of water do you enjoy? What is your favorite body of water?

At the end of my blog tour we’ll be drawing the name of two commenters from all of the blogs to gift not one, but two fantastic prize winners. See below for details, and thanks for being here! xo, misty )

Published by Entangled Publishing - Suspense Imprint
Come Hell or High Desire can be bought at:

Rafflecopter link for Misty's Prizes:
What you can win  click to see what's on offer
International Giveaway link   click to enter draw

About Misty
Misty’s love affair with words started in middle school when she penned dark stories set in exotic locales she knew nothing about. In college, her boy-angst spilled over into disturbing reams of poetry. After grad school, real life hit, and the writing went into hibernation until she found her own happily-ever-after with an ultra linear man who is the long-suffering counter-balance to her zig-zagging tendencies. Now, she spends her days writing emotionally complex, adrenaline-fueled stories, teaching Zumba, and praying her children don’t come home with math homework. 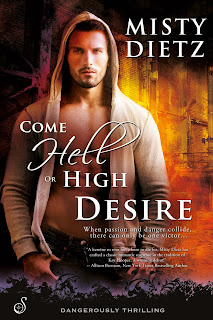 Come hell or high Desire....
Torn between dangerous desires…
Framed for a series of brutal murders, rebel-turned-CEO Zack Goldman must go to ground. When he discovers that sexy boutique owner Sloane Swift has a shocking gift—terrifying visions that connect her to his mentor’s missing daughter—he can’t believe her refusal to help him. Nor can he believe he’s actually falling for the frustrating woman.
Their chemistry will either find its perfect equation…
Helping an accused killer ranks low on Sloane’s to-do list, no matter how hot the attraction burns between them. But putting to rest her overwhelming guilt over the missing girl’s fate proves more difficult than she ever imagined…that is, until her heart and conscience begin to align.
…or detonate everything in its path.
As the real killer locks in on Sloane, Zack will stop at nothing to keep her safe. And as they earn each other’s trust—with danger in hot pursuit—they may just lose their hearts in the process…

Here's a little heated moment from 'Come Hell or High Desire' to get you interested:
Her fingernails suddenly raked at her skull. “Lord! I almost forgot. We have to go back to Ann’s. She has a diary!”
He swerved into an empty parking lot and swiveled to face her, blood pounding in his ears. “What are you talking about?”
“Ann keeps a diary. We have to find it.”
“You’re just telling me this now? You should have goddamn said something right away!”
“Don’t you dare curse at me like that, you seismic jackass!”
He had to get out. He flung the truck door open and strode onto the cracked asphalt. Her door slammed shut moments later, and within seconds she was wagging a finger in his face. “And don’t you walk away from me, either!”
“Then don’t be such a damn shrew.”
Color flooded over her cheekbones seconds before she punched him in the gut. Hard. An ancient fire lit up his nerve circuits and adrenaline had him widening his stance. His heart gunned.
His groin tightened.
And she was still shrill.
“I’m not a shrew! How am I supposed to act in a situation like this? You think I’m enjoying this? I hate it! But unfortunately I have a conscience which would haunt me for the rest of my life if I don’t follow this through until we have some answers. You came to me and wanted to rule out the church first. Then with everything that happened, I forgot about the diary until right now. That clear enough for you, you—”
Clear enough, honey.
He vised her head between his palms and kissed her. He hadn’t meant to, but the moment her mouth opened to his, he was lost. Not breaking contact with her mouth, he wrapped one arm around her, his hand splaying across her ass, locking her hips against him. Her hands were in his hair, her hips grinding, driving him crazy. They feasted on each other’s mouth, tongues dueling, daring, seeking. He felt her fingers between their bodies, slipping underneath the waistband of his jeans, pulling at the hem of his shirt. Her fingernail scraped his abs and he groaned. She leaned away from his mouth, her eyes dead sexy. Liquid brown. He was gonna—
A car horn blew, jerking him back to life. Back to the parking lot. He looked over to see a man in a black minivan at a stoplight giving them the thumbs up. He honked twice more, waved, and drove on.
Sloane burst into a fit of laughter that quickly dissolved into tears.
And that clinched it. He’d woken up this morning in some creepy-assed Twilight Zone.

Thank you for visiting today and my very best wishes to you, Misty, for a great tour for Come Hell or High Water!


Posted by Nancy Jardine Author at 08:33