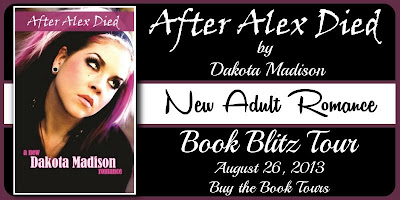 Monday Moments welcomes Dakota Madison. She's brought along her New Adult Romance - After Alex Died -  to share with us, so let's find out a little about Dakota and her new novel published on the 12th July, 2013. 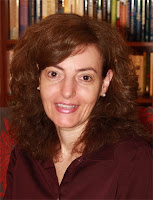 Dakota Madison has been writing since she learned to read and fell in love with books. When she’s not at her computer creating spicy new romances, Dakota is traveling to exotic locales or spending time with her husband and their bloodhounds. 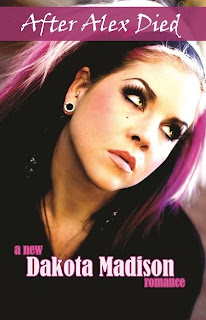 “Don’t be someone who defines her life by someone else’s death.”
Dee Dee DeMarco’s brother, Alex, was funny, free-spirited and creative. He was also gay. Tormented by bullies, Alex killed himself on his 15th birthday.
Two years later, and now in college, Dee Dee believes getting a summer job working with a college-prep program for disadvantaged high school students is a stroke of luck, until she discovers that the guy assigned to co-lead her group is Cameron Connelly, a star basketball player and one of the bullies who tormented her brother to death. How can Dee Dee possibly spend the entire summer working so closely with one of the boys she blames for her brother’s death?

AUTHOR’S NOTE: I think this is a little story with a lot of heart. I hope you think so, too!

After Alex Died on Amazon

We've also got a little of the novel to share today so settle in and enjoy:


We were told to meet at 9 a.m. and by that time it was just a few minutes after the hour, there were 10 of us assembled, five guys and five girls. I recognized two of the girls from my Shakespeare class. They were English majors like me but I didn’t know their names. They were a year ahead of me and were in a sorority. Sorority girls didn’t associate much with non-Greeks like me and especially non-Greeks who looked like me: hair dyed multiple colors, tattoos on both wrists and heavy dark eye makeup. My mom liked to say my drastic change in appearance my senior year of high school was about me putting up a wall not only to keep other people out but to keep my emotions in. She was probably right on both counts.
I scanned the rest of the group, which was a mass of unknown faces until I hit upon a face that was forever burned in my memory. Cameron Connelly. He was one of three people who I hoped to never see again for the rest of my time on Earth.
Cameron looked different than I remembered him. He was still tall and muscular, with messy blond hair and sea green eyes. But he looked older and harder than the carefree basketball player everyone in our high school adored.
I was overcome with a plethora of emotions: fear, dread, anger, hatred and every other negative emotion I had been harboring for the last two years. The feelings were so strong, I couldn’t breathe. I tried to relax but the harder I tried, the more tense I became and I nearly passed out. Luckily, Sofia grabbed my arm before I fell to the floor.
“Are you okay?” Concern covered her face.
I tried to speak but the words got stuck in my dry throat. I just shook my head.
“Are you hot? Do you need some fresh air?”
What I needed was to get away from Cameron Connelly—forever.
Before I had a chance to respond, Sofia led me toward the front doors and pulled me outside.
“Take a deep breath,” she ordered. I got the feeling she had younger siblings who she mothered. She had that way about her.
I inhaled a deep breath of humid New Jersey air. New Jersey wasn’t known for having the finest air quality and the summers could be hot and sticky. This summer was already proving to be no exception.
Sofia narrowed her eyes. “What’s going on?” I felt like she could see right through me into the deepest recesses of my soul. She was the first person who had ever looked beyond my so-called daunting appearance and dark clothes (my cloak of gloom as my mother called it) to even truly see me at all.
“Nothing,” I replied even though I had the distinct feeling that Sofia wasn’t about to let it slide. I was right.
“Come on. Do I look stupid to you? I’m from Newark. I’ve not only been around the block a few times, I’ve been up and down it, too. Now, I’m going to ask one more time and this time you’re going to give me a real answer. Got it?”
“Yeah, I’ve got it. I don’t think you’re going to have any trouble handling the high school kids, that’s for sure.”
That got Sofia to smile. I already figured out that she didn’t smile much but when she did, it was genuine.
“Seriously, what’s got you so freaked out?” she asked, her tone softened.
“There’s a guy in the group, Cameron Connelly. Let’s just say we have a history. From high school. He’s not someone I ever wanted to see again.”

Thank you for coming to visit, Dakota. My best wishes for your success with 'After Alex Died'.

Posted by Nancy Jardine Author at 08:38