Welcome to my post for the Historical Writers Forum #Jolabokaflod Blog Hop.

This #Jolabokaflod (Christmas Book Flood) Blog Hop is an exciting way for HWF members to share a bit of their writing, especially if it's set at Christmas time. It's also about entering into the tradition of gifting of a book since that's what the Icelandic #Jolabokaflod is all about. The gift of a book for Christmas Eve means a fabulous excuse to settle down, read and just....enjoy!

You'll find details of my gift for you at the end of the post.

Most of the Blog Hop contributions, so far, have included excerpts that are set during the Christmas period. I have just a wee bit of a problem with that because I've never included a 'Christmas' scene in any of my historical Celtic Fervour Series novels, or in my time-travel historical The Taexali Game. Since my historical novels are set in the late 1st C AD, and early 3rd C AD, my historical characters led a much more pagan lifestyle. In their day, a Christmas celebration - as is presently celebrated - was not yet invented. 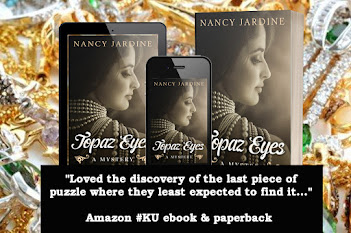 However, I have made a mention of a December Christmas-related tradition in Topaz Eyes, my contemporary romantic mystery thriller. Topaz Eyes has a deep and complex ancestral plot, my way of adding multiple historical aspects to a mystery. The story is effectively a 'somewhat deadly' treasure hunt for the missing 'Tiru Salana' emerald collection. They are fabulous pieces of jewellery - once owned by a Mughal Emperor - which were acquired by the Hoogeveens in the 1880s, an Amsterdam family who owned a jewellery business. The last family mention of the jewels was in 1910 when the matriarch separated the collection and gave it to her daughters.

My two main characters are Keira Drummond from Edinburgh and Teun Zeger, an American of Dutch descent.

Keira, initially, has no idea why she's been included in the Hoogeveen family quest. She's not descended from the Hoogeveeens but she soon realises that she did know one of them quite well - an old lady named Neela.

It IS Teun's family but he knows very little of his grandmother Marijke's life in Holland before she moved to the U.S. in the early 1930s.

Keira and Teun pair-up to see if they can find any traces of the jewels in his uncle's house in Minnesota, and in items belonging to Teun's father who is currently in a nursing home. Though Keira and Teun have only met very recently, there's a little bit of a sizzle happening...

A pile of letters from the loft landed with a soft plop in Keira's lap, while Teun tackled the smaller pile from his dad’s stored possessions.

It struck her as being an infringement of privacy to read letters sent to his Aunt Marta, but Teun decided it was necessary. The first few were from friends: nothing in them about jewellery, or any historical references.

A small pile of carefully folded papers lay on her lap, tied with a faded pink ribbon. Reverently untying the bow, she opened the first one. It wasn’t in English. She wasn’t familiar with the dialect and reread the first paragraph again before it clicked she wasn’t reading German. Of course! It was written in Dutch. Confirmation came when the sender’s name was revealed. She just as carefully undid the rest of the pile and laid them flat on her knee: all from the same sender.

“Teun!” She nudged him with her knee. “This pile is to your grandmother Marijke from her mother, Martine.” As up in the loft, she couldn’t contain her excitement. Surely the letters had to have significant information?

He shifted beside her and lifted the first one, saying nothing till after he’d scanned it. Disappointment wafted from him. “I can read the Martine at the bottom, but nothing else.”

Keira absorbed his silent question as his grey eyes deepened, his brows a tight frown.

“I can make a reasonable guess at some of it, but I’d much rather it was properly translated by someone who is Dutch.”

“We can do it later.” Teun’s voice was clipped. “Let’s see what you can come up with first. Are you willing to try?”

They sat in front of Keira’s laptop, all six letters smoothed flat. In no time at all she’d downloaded a Dutch dictionary. She then made sure the letters were read in date order of earliest first; thinking that if it was her mother who wrote to her, the first letters would be about more practical things – like settling into a new home in a new country.

That was exactly what Martine’s first three letters were like, the letters over a period of three months during 1934. It was a multiplicity of questions which Keira was able to translate; reflections of day-to-day living. Both she and Teun found Martine’s writing style amusing as she translated, written Dutch much easier for her to read than she had expected, many words being similar enough to German though the grammatical structure was not alike. In the letters, Martine asked Marijke lots of questions, but also posed what appeared like enquiries about her own exploits. She’d written things like… I suppose you’ll not guess who I met at the Opera last week. Whether Marijke had been interested or not, the answer followed in a flowing style.

“Look, Teun!” She almost jabbed her finger through the fragile paper. “Martine’s talking about Neela bringing Gabriel Henke to their house.”

“Don’t keep it a secret.” He looked amused since she was all but hopping up and down on her chair. “Read it to me.”

“Give me a minute.” She mumbled at first, focusing on the meaning of a phrase she’d no clue of. A few clicks later, she turned to him. She couldn’t stop grinning. “I think she says something like… Neela brought this little know-all of a man home and introduced him to us. Marijke? You can have no idea of the dread in my stomach. He clearly adores our Neela, but he’s the funniest looking little man. His smile is constantly like the child who has won the only treat from Sinterklaas.”

“Who?” Teun nudged her to get an answer, since she was laughing her head off.

“St. Nicholas. Were you never told about Sinterklaas coming to little kids on the 5th December and giving the children gifts; sort of early Christmas presents?”

He struggled with an elusive memory. “Grandma told us lots of things. I don’t remember anything about this Sinterklaas guy, but she did say her Dutch traditions didn’t always fit well in Minnesota.”

She clapped him on the shoulder in commiseration, her chuckle whispering at his ear. “Ah well, that’s maybe because Sinterklaas comes up to Holland by boat from Spain, with all his booty in his sack…so maybe your grandmother thought coming across the Atlantic was just a bit too much, too far-fetched? And perhaps it’s why she embraced American traditions like Thanksgiving, which is quite close to Sinterklaas Day.”

They continued with the letter, Teun interrupting occasionally for clarification. “So, was Gabriel a weird looking guy?”

The tradition of Sinterklaas arriving by boat lives on in Holland. The image below is of him arriving at Tilburg in 2019. It's generally in the late afternoon, or early evening of Dec. 5th that the kids in Holland receive presents from Sinterklaas. (prior to St. Nicholas' Saint Day on 6th Dec)

My own children were too young to remember the occasion now, but one year when we lived in Holland, we visited friends on Dec. 5th. Their kids were a little older and had learned about Sinterklaas at their Kleuters class (pre-school/Nursery) Sinterklaas very kindly stopped by the house and not only left a gift in the kids' shoes left out on the porch, but Sinterklaas and his Swartje Piet helpers popped in to the house to meet the kids. (This happened in 1981, but nowadays Sinterklaas'  Piet helpers no longer wear the 'Swartje' blackening make-up that was once traditional.)

On that occasion our Sinterklaas and his helpers were my friend's Dutch neighbour and his sons. A pretty usual circumstance at the time, and possibly still the case.

AND now for my #Jolabokaflod gift to you.
A #FREE ecopy of Topaz Eyes can be download from Amazon between Thursday Dec. 17th and Sunday 20th Dec.  Click the link HERE
But...if you would rather read a historical novel, my time-travel The Taexali Game is also #FREE in Amazon Kindle from Thursday Dec 17th to Sat. Dec. 19th.  Click HERE
(NB. The Taexali Game is intended for a wider readership from early teens onwards, but adults have told me they love it, too!)
You are. of course, welcome to download both copies and fill your Kindle even more.
Enjoy the rest of the #Jolabokaflod Blog Hop. Still to come will be posts from the following authors (links will be updated each day on this blog as the posts become live):