Blog Touring and Blog Hopping  - Are they the same thing? In a way they are but the current ones happening this week have two different emphases.

The Blog Tour for After Whorl: Bran Reborn has 3 main elements for the 21 bloggers who are involved in featuring the novel. During the Rachel's Random Resources organised tour the bloggers are all featuring the book details: some with a unique excerpt chosen by me; some who have interviewed me; and others who have read and reviewed the novel. At each stop there is the opportunity to ENTER the draw to win #FREE copies of the novel- a signed paperback and an ecopy.

**Till Sunday 10th November 2019 After Whorl: Bran Reborn is reduced in price across Amazon to only 99p. Snatch your bargain if you haven't yet read it. **

I've already posted some of the excellent reviews received so far and will add more to the end of this post. 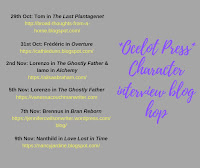 The Ocelot Blog Hop, on the other hand, centres around character interviews. Each participating Ocelot Press author is interviewing a character from someone else's novel. you can look forward to me posting next week my interview with Nanthild from Cathie Dunn's Love Lost In Time. My fellow Ocelot author Jen Wilson will be interviewing Bran from Aften Whorl: Bran Reborn and that will happen on Thursday 7th November.

Stephanie of Litflits Blog had some wonderful things to say about After Whorl: Bran Reborn.
(With all of the blogs below please click the links to see their full reviews)
"I think that Jardine has done an excellent job of depicting the Romano-British world in the Celtic Fervour series and I felt that After Whorl: Bran Reborn was an even more engaging novel than The Beltane Choice. I'm now looking forward to the third in this series, After Whorl: Donning Double Cloaks."

Donna of Donna's Book Blog   has highlighted the connections between Books 1 and 2 and quite rightly recommends reader take full advantage on the continuous story by reading the series from the beginning.
"I thought that the story was addictive and after I had started I wanted to carry on reading to see where it would go and I thought that the ending was great."

The Over The Rainbow blogger is another satisfied reader.
"The story is historical with a lot of action and a bit of romance to keep the reader absorbed in the story. I thought it was a very entertaining read and I look forward to reading more in this series."

Here's a bit of Jen's review on  Historical Fiction with Spirit
"In this series, there’s so much about the politics, geography and sentiment of the time, and yet, it never feels like it is being ‘told’ to you, as a reader. Instead, the relationships between clans, and the Romans, and the individuals involved, are shown through great character development, and interactions."

I am so delighted that all of the bloggers involved in the tour have taken the time to feature my novel and thank every one of them.

Posted by Nancy Jardine Author at 17:49