Wednesday welcomes to the Winter Solstice!
Today marks the Winter Solstice and I always look forward to this time knowing that after today the days will get longer and the nights shorter. Though, to be perfectly honest, in my part of Scotland, it takes a good few days to actually FEEL it being any different.

As a hobby historian, I’m enthralled by everything I read about the Winter Solstice. Though, I confess to sometimes being a tad confused as to what all of the possible historical meanings and traditions surrounding the winter solstice might be.

There are current neo-pagan winter solstice ceremonies held in my part of the world, , which hearken back to the past, to a time when the people of the land—hunters or farmers—spent most of their time out of doors. Worshipping the sun was natural and when the dark days of winter descended it must have seemed like their sun god was neglecting, or forsaking, them. For these ancient peoples, respecting the sun god as a wheel which indicated the turning and changing of the seasons was common from The Norse Lands to the . The winter solstice was a time for killing the livestock they knew they couldn’t feed over the harsh winter. It was a time for drying off, or perhaps smoking, some of the meats and feasting with what could be afforded for celebration. The small beer supplies would have been stored and a current brew ready for merrymaking! When the days are short, grey, wet and cold at the winter solstice it’s a perfect time for boosting the spirits.

For some the Winter Solstice marks the beginning of YULE, a period of celebration that lasts some days. The Christian festival time of Christmastide was conveniently re-named from the existing pagan winter festival time - weren't the earliest Christians practical people?

There are various spellings of the word Yule (jul/jol/Iul/ geola) but the days following the winter solstice were a time for lighting fires and keeping warm, for feasting and telling stories of the return of the sun. It’s unknown exactly how the winter festival ceremonies during the Neolithic or Iron Ages were actually conducted in Aberdeenshire but it’s nice to speculate that they would have been similar to what probably went on in mainland Europe. We have some ancient writing by notable Romans, like Julius Caesar, who briefly mention the druids of the continent, in and other geographical areas. From those ancient sources many interpretations of what druid devotees did have been formed over the intervening centuries. Similarly, much of the information I've included here has been interpreted from ancient sources.
Druid cutting of mistletoe to use in fertility rites is a common modern image, leading to the current use of kissing under the mistletoe sprig—yet real mistletoe isn’t easily found. Yes, it can be cut from the oak tree (and other tree species in which it inhabits) but being a parasite, it won’t be found in every tree! However, the oak tree was powerfully sacred in the druid faith and any white mistletoe berries growing on it were seen as a symbol of life during the dark winter months.

My home-made holly wreath hearkens back to ancient druidic rituals when the dark green evergreen leaves of the holly (Ilex) represented the desire for nature to keep the earth beautiful during the ‘dead’ period of winter. 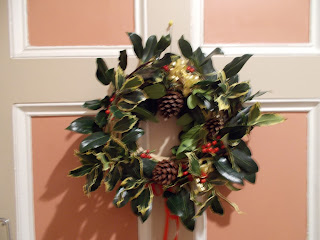 The Celts set branches and leaves of holly around their dwellings during winter to provide shelter to the fairy folk and to give harbour to other small creatures, an extension of the welcome they gave to human strangers who stepped into their homes.

I like the idea that my holly can be used for shelter!

The deep red berries of the holly are also said (by some) to represent the sacred menstrual blood of the Celtic goddesses, a life affirming aspect of womanhood. The wearing of holly to attend druidic religious ceremonies embodied some form of protection against malignant spirits of the wood, like the god Cernunnos who was claimed to be fickle in his dealings with humans.

Today, the Christian use of holly symbolises eternal life; the thorns a reminder of the crown Jesus wore during his crucifixion; and its red berries Christ’s spilled blood.

That these ancient traditions are still adhered to in some form is testimony to the blending of religious practices and adherence over the centuries, and the country that I live in has many prime examples of this. Winter solstice traditions may have indicated different religious adherence in days gone past, and even perhaps today, but the one constant of the winter solstice is that it marks the ‘standing still’ of the sun before the shortest day leads in to days becoming longer and longer, with the sunlight becoming more predominant than the dark days of the moon.

Aberdeenshire is full of historical artefacts dotted around the countryside, open to the eye and available to the touch— should anyone wish this. Neolithic standing stones and stone circles abound, many of which are thought to have been set down in perfect alignment with the seasons and were most likely used as lunar calendars, all executed within an impressive astronomical knowledge. Yet, it would appear that the Neolithic locals who frequented some of the stone circles also had other purposes beyond getting a seasonal marker that told them to expect the days to lengthen after the winter solstice.

By the late Iron Age, what the locals of 'Aberdeenshire' did around the standing stones or did at the Winter Solstice isn't known either but I'll be including a short scene in my current writing, the still unnamed Book 4 of my Celtic Fervour Series.

I'll be writing more about Aberdeenshire stone circles very soon so look out for that and for news about a special seasonal OFFER!

Posted by Nancy Jardine Author at 10:10