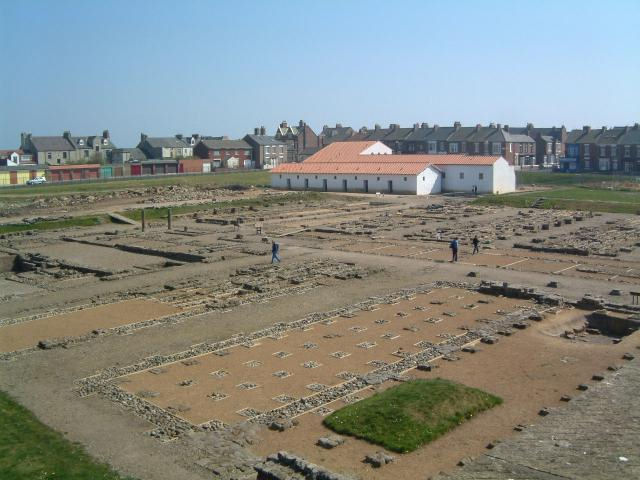 Sadly, no, I’m not having a flying visit to the River Tyne near , but I have been delving into its past as part of my FutureLearn #FLHadrian’s Wall course. At the Arbeia Roman Fort and Museum there are some very fine reconstructions that I must get back down to see because when I last visited, sometime around the millennium, I remember seeing the ground layout of the fort but I don’t remember much about the Gateway.

And what have my moments been about today? Finding out about the changes to the fort made by the Emperor Septimius Severus somewhere around AD 208-211, though I now read that there’s a possibility that the new construction of the time just might have been instigated for Severus by the then Governor of Britannia, Alfenus Senecio.
https://commons.wikimedia.org/wiki/File:0205_Altes_Museum_Septimius_Severus_anagoria.JPG

Today’s main puzzle has been to make an estimate of how far the stocks of the granaries could go when feeding Severus’ Legions of the AD 208-211 period. Given the dimensions of the granary, and the amount a sack of grain would weigh, and the fact that a soldier’s daily ration was about 0.8kg, and that Severus probably had 4 Legions plus another 10 cohorts- how many days would they get out of that granary?

Well, I did add that not all legions were an exact 4,800 soldiers. And a Cohort wasn’t always exactly 480 men. The mice and rodents would have had a fine time nibbling the stock and lots of it would have gone mouldy because northern is just about as damp as is, and it rains a lot there, too. Don’t forget the mist that’s also very damp! And then there would have been all the other attendant people of the regiment who would have eaten some of the grain, some immunes and slaves and wives and children and the ‘bidie-ins’ (as in non married women and maybe children) who may or may not have been transient. And then there would have been accidental dropping of grain and maybe poor measuring of rations. And someone else on the course quite rightly suggested other kinds of damage like accidental fire ...or theft! Heavens forbid if you were found trying that trick.

And then I added a suggestion that if the horses got any grain then that’s another whack gone.

I’m really loving this course and honestly…I’m not being glib to poke fun of the course…not at all— but my maths is perhaps a trifle lacking and today was fun!

Just click the link and make your own estimate. I dare you!

Meanwhile, I'll try to squirm some of this new knowledge into my current WIP but it will be to do with General Gnaeus Julius Agricola's stores rather than that of Severus.