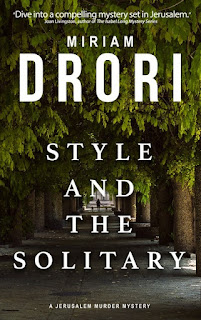 My congratulations go to the newest member of the Ocelot Press clowder - Miriam Drori - who has launched Style and the Solitary - A Jerusalem Murder Mystery, Book 1 of a murder series set in Jerusalem.

Miriam is no stranger since we have both, in recent years, been published by Crooked Cat. I've enjoyed reading previous work by Miriam and look forward devouring to my brand new ecopy of Style and the Solitary purchased today from Amazon (see link below).

I'm delighted to welcome Miriam today to tell us more about what prompted her to write this compellingly different murder mystery.

“Where do you get your ideas from?” is one of those questions most authors have probably heard too often. The fact is that ideas come from everywhere, from a childhood memory, an overheard conversation, something you heard on the radio or watched on TV or read in a newspaper. The possibilities are endless as long as you keep your mind open to them. Because everything you experience or hear about could become inspiration for a novel or could fade into oblivion. It depends on you, the author.

How did the story of Beauty and the Beast become an important inspiration for my latest novel – Style and the Solitary? I don’t remember exactly, but I do remember reading about the eighteenth-century French woman who wrote the original story – not as a story for children but as one with a moral for adults – and thinking this would be perfect for the character of Nathalie, who emigrated from France after studying French literature. And if Nathalie could be ‘Beauty’, then Asaf could be ‘the Beast’, the one who could change, not from beast to prince, but from loner to someone else. Naturally, that change wouldn’t be as swift as the beast-to-prince one, and he’d probably never become the life and soul of the party, but at least Nathalie could help facilitate the change to ‘non-loner’. 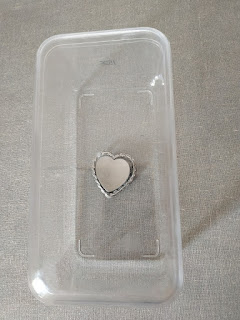 A radio programme I heard, about victims of rape, included a woman who wanted to testify against her rapist but found she was unable to express herself under pressure in a law court. That stuck with me, as I knew that Asaf would worry about being unable to defend himself.

Jerusalem provided a wonderful backdrop to the novel. From the market to the police station to the Liberty Bell and on, the city just continued to give its all to the story.

And then there was the brooch, silver-coloured and heart-shaped, sent to me when I was twelve by a school friend who’d left suddenly and secretly to emigrate to Canada. Yes, I kept it all these years in the box on which she’d written to me. For the novel, I placed the brooch in a transparent, coffin-shaped box and pretended it was made of real silver. 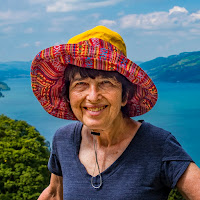 Miriam Drori, author, editor and social anxiety warrior, worked as a computer programmer and a technical writer before turning her attention to full-time writing. Her novels and short stories cover several genres, including crime, romance and uplifting fiction. She has also written a non-fiction book about social anxiety.

Born and raised in London, Miriam now lives in Jerusalem. She has travelled widely, putting her discoveries to good use as settings in her writing. Her characters are not based on real people, but rather are formed from an amalgam of the many and varied individuals who have embellished her life.

When not writing, she likes reading, hiking, dancing and touring.

Style and the Solitary

An unexpected murder. A suspect with a motive. The power of unwavering belief.

A murder has been committed in an office in Jerusalem. Asaf, who works there, is the suspect. But is the case as clear-cut as it seems?

Asaf is locked in a cell and in his own protective wall, unable to tell his story even to himself. How can he tell it to a chief inspector or a judge? The fear would paralyse him.

His colleague, Nathalie, has studied Beauty and the Beast. She understands that staunch belief can effect change. As the only one who believes in Asaf’s innocence, she’s motivated to act on his behalf. But she’s new in the company – and in the country. Who will take her seriously?

She cajoles her two flatmates into helping her investigate. As they uncover new trails, will they be able to change people's minds about Asaf?

Will Nathalie’s belief in Asaf impel him to defeat his own demons and clear his name?

Thank you so much for visiting today, Miriam, and my very best wishes for a super launch today and continued success with Style and the Solitary.

Posted by Nancy Jardine Author at 14:03