Samhain and the dark days of winter

Today is Samhain, otherwise known as Halloween to most people nowadays.

I've written before on this blog about the Celtic festival of Samhain (use the Search facility on the sidebar to find them) so, today, I'll try avoid too much repetition. The Ancient Celts likely regarded Samhain as the most important of the four main Celtic celebratory festivals that took place each year. Samhain, beginning on the 31st October, marked the end of one year and indicated the beginning of the new year. Some believe the ancient festival lasted over a 3-day period which would definitely have been time enough to enjoy a good celebration. 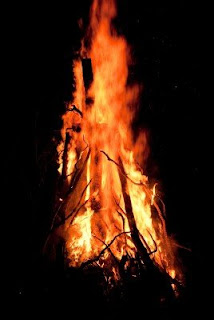 It was highly important for those ancient people to believe that the gods would favour them through the coming winter months and ensure they survived till the next 'turn' of the natural year when the days would lengthen again and natural warmth and new growth would return.

Samhain was essentially a harvest festival which if conducted well would ensure that the crops just harvested would remain healthy and fresh for months to come. Decisions would be made about which animals might be slaughtered to provide hung, or smoked/preserved, meats for during the winter months; and which beasts would be kept alive to provide milk for the inhabitants and for breeding from the following spring. The beasts kept alive would be brought in from summer/autumn pastures and would provide a degree of natural heat in the Celtic roundhouses over the darkest, coldest months. We won't mention any smells that today's generations might find unwanted - it's assumed that the ancients were inured to such and accepted animal waste as part of the natural order of daily life.

It's believed, from the oral tradition, that the late Iron Age inhabitants who followed the druidic faith would leave untended fires in their dwellings while they all went out to harvest the crops on Samhain (beginning on the 31st October). The harvested crops were then laid at their doors for the ancestors in the Otherworld (like a parallel universe) to view. It didn't matter if those roundhouse fires burned themselves out because at the end of the harvesting process the druid priests ceremonially lit a communal fire around which celebratory feasting and drinking would take place. At the end of the festivities a 'new' firebrand from the ceremonial fire would be issued to each household who would then use it to kindle a new fire in their hearth, a symbol of blessed continuity for the coming year. 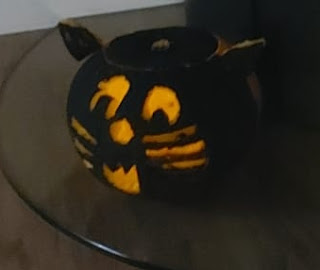 Samhain was also regarded as an occasion when the veil between the living and the dead would be so thin that interaction could take place. To light the way for the departed spirits a small 'tallow (?)' torch brand' would be placed inside a carved out neep/turnip.

The scary faces aspect of a Halloween neep or pumpkin that might be carved out today developed when Christianity introduced the concept of the devil and bad omens to the already popular Celtic tradition. This cat lantern photo, acquired from my grandkids' collection is much more intricate (and much more cute) than the simple light that the ancient Celts would have left for the ancestors to find them.

To prevent unwanted interference from unfriendly spirit visitors a degree of disguise was donned to confuse those bad spirits into believing they were at the wrong door. The tradition of guising in Scotland and Ireland, the dressing up factor of contemporary Halloween, is thought to have developed form that ancient method of repelling bad spirits.

Will I be guising this Samhain/ Halloween evening? Dressing up is not planned but I do aim to join my grandkids in 'Dookin' fir Aipples' after they have done some guising around the village with their parents ensuring no bad spirits intercept them! Since it's a school day tomorrow, I imagine that the guising won't go on for too long.

There are references to the Samhain festival in some of my Celtic Fervour Series novels, particularly Book 3(You may manage to locate extracts in earlier posts on Samhain)  but I didn't ever use the Samhain festival as the theme of any particular scene. [Perhaps I ought to remedy that in future, maybe in the short story collection that's already started as a companion to the Celtic Fervour Series?]

Samhain Greetings to you!

Posted by Nancy Jardine Author at 12:58