It's definitely a murky grey morning, the famous Aberdeenshire haar (mist) blanketing far inland. When I was growing up in Glasgow we might have called it a 'Pea Sooper' (soup), except in the 1950s and 1960s the stench of sooty coal-smoke added to the general fug, making it even more dense.

However, the haar means it's atmospheric enough for me to wonder about the Georgian era walls in the room I'm currently renovating. The dining room, a sizeable room, doubles as my study when not used for feeding guests. Since the Covid 19 situation prevents even family gatherings (we're presently not allowed to visit anyone else's house), I could say it's an opportune time to do renovations.

This story started with my need to improve the energy efficiency in my largely 200-year-old house. The house has an interesting history, and was the home and workplace of the village doctor (s) for generations up until the 1970s. I haven't yet found out who the very first doctor was who inhabited the house, but it was a definitely a doctor who built a purpose-built granite-walled extension as a surgery in approximately 1900. A further addition was made around the 1960s (?) as a dedicated patient waiting area with a toilet, but that was a fairly short-lived use of the room. The surgery became surplus to requirements in 1973 when a large health centre was created in the nearby market town, and the incumbent doctor took himself off to be based there rather than working from home.

My house doesn't follow typical Aberdeenshire granite house proportions since the downstairs reception rooms range around 26-30 square metres, probably double the size of the rooms of a traditional average Aberdeenshire two-up, two-down granite house. The walls are typically three-feet thick granite blocks which means, though sturdy, the house is a challenge to heat and to make energy efficient!

Two open fires burning coal or logs were only used occasionally, the central heating being the prime heating source. This meant that although the chimneys were a source of air flow, they could also be draughty and the expensive energy used to heat the rooms blithely went up the chimneys. The other problem was that being uncapped, the chimneys pots were a fine place for the local crows and blackbirds to nest-build, and it wasn't too unusual to have to get a live bird out of the lounge or dining room when it had fallen down the chimney.

I debated long and hard about changing to multi-fuel burners but eventually decided that it was time to go electric since the fires are likely to be only decorative and occasionally used, rather than daily-functional. I hate destroying history but energy saving had to be a priority. It was time to get rid of the 1930s built fireplace which was an ugly piece that I'd grown used to. You can decide for yourself if you think it handsome! 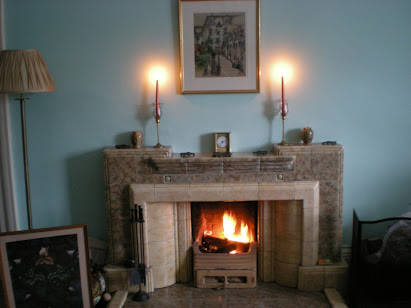 I'm not sure which doctor would have been in situ when the green-mottled, sort-of Art Deco fireplace design was chosen but it probably replaced a larger Victorian mantel if the re-plastering shadows around the chimney breast are anything to go by.

But back to the chimneys and specifically to the very decorative square chimney pots that remain undated. They are not at all typical of Aberdeenshire styles and have probably been imported (maybe from England) at some point. When investigated by the chimney sweep, they were found to be cracked and most of the six matching pots needed replacing. That may sound easy enough, but it proved not to be the case. They appear to be pretty unique around here and, though we tried, we could find no matching ones via the usual sources for recycled chimney pots across the United Kingdom. No current manufacturer makes the same style either, so if I had bought new ones they would not have been exact matches. An option might have been to spend literally thousands of pounds on having them created to my specific design. 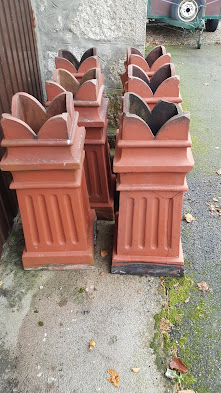 I hate to destroy history, and I really love the chimney pot design, but since the pots and chimney were going to become redundant anyway spending a small fortune was neither practical, nor sensible. My chimney stacks now have 6 new round ones that don't look too much out of place - they're less decorative but at least they all match. And...I'm incredibly glad the old ones have been replaced because I watched the slater remove the first one. All it took was for him to rock it back and forward a couple of times and he then lifted it right out of its slot, even though they are incredibly heavy. Since we've had some fierce storms lately, watching the very weighty chimney pot being removed so easily gave me some very scary moments.

A reclamation yard might take the sound ones but the others are destined to become garden planters which I'll be delighted to place in situ and then never move them again!

My new simple-styled hearth is of different proportions from the previous one, so there is a bit of plastering work ongoing and I now need a joiner to replace the now-too-short, moulded, early Victorian era (?) skirting. My joinery and plastering skills are zilch but what I can do is the redecorating. i.e. wallpapering and painting. I've already made a start on painting the ceiling panels. This will be a slow process since I'll be doing some contrasting paintwork on the decorative ceiling cornices. Since the walls are 2.4 metres high, it means a lot of ladder climbing as I'm only 5 feet 2. (approx. 1.56m).

When I stripped the walls of two top layers of paint and at least two of wallpaper, it has revealed some earlier design work. Since the house is believed to date to the early 1820s, it was constructed during the reign of George IV. The period style of that time is sometimes referred to as late Regency since George IV only acceded properly to the throne after his father, George III, died in 1820. From then George IV's full reign is sometimes termed late Georgian till he died in 1830. Victoria didn't become queen till 1837 after the death of William IV, George IV's younger brother. I have no way of knowing what the room originally looked like and Aberdeenshire house decoration may, of course, have reflected something quite different from what was typical elsewhere across the UK. 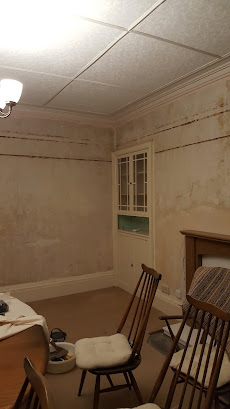 The walls have three lines painted in dark-red durable paint very high up the walls. The painted lines  (an early oil paint?) are possibly original decoration separators with the rest of the walls whitewashed, or distempered when that type of paint became available. Or the painted lines may have been guide lines for the joiner to add the wooden architrave rails which were used to hang pictures or paintings from, in Victorian style decor rather than the original late Regency or late Georgian style. What I need to do now is do a little bit of research to see if my theories are anything like reasonable.

My main questions would be at what point were the guidelines created? Would it have been early on during its Regency era beginnings, or later on during the Victorian era?

The typical architrave 'dado' rails were set at the relatively low height of the top of a dining chair, the intention being to prevent the chair denting the plaster if the wood collided with the wall when being vacated. There are some plastered over holes around the room at this level which may indicate there was a dado rail in situ at some point but not enough to be sure. Of course, I have presently no evidence of how long the room has been used as a dining room, except knowing it has been used for dining since the early 1980s -  the owner we bought it from having used it as a dining room. 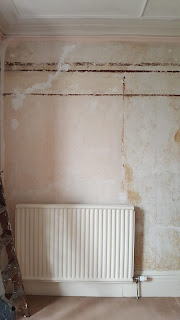 One corner near the 'box' bay window shows signs of the entry door to the room having originally been at that location. The plaster there is different, according to the plasterer who has tidied up the area around my new fireplace, and he reckons that the lathe and plaster wall at that end above the radiator has a different 'sound' to it when he tapped it. The skirting board has also been extended below the 1970s radiator and there is a vertical line of dark-red paint which may have been a border edge around the door frame, which would back up the idea that for a while there may only have been a painted-on picture rail for some time.
Behind the radiator was the Regency striped wallpaper you see below, but at a guess it was 1960s or 1970s wallpaper and not original Regency! 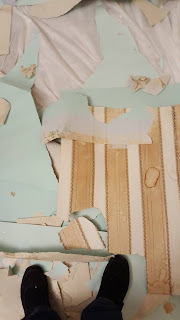 Living in an old house means lots of that lovely research that I love to do!
Much work has yet to be done in what will be my new study so till next time...
Slàinte!
Posted by Nancy Jardine Author at 22:07