I love finding out about newly discovered Roman roads that have lain undiscovered for thousands of years. But that’s not quite the case for my character Beathan, in Beathan the Brigante, because he is travelling on Roman roads, day after day, on his long, forced trek to Rome.

As a hostage of General Gnaeus Iulius Agricola, Beathan has no say in the matter but adjusts his chains when necessary. Sometimes he’s linked to a wagon by his neck ring, though more often the chain is attached to the band around his wrist. I think Beathan would be seeing the roads travelled in a different light from me, though it has to be said that he can’t help being fascinated by it all.

Born into a family of Late-Iron-Age Brigantes, Beathan is more used to the kind of ‘roads’ that are not much more than dirt tracks, at least until he is captured by the Roman enemy. From that point onwards, he travels on the roads laid down by the usurping Roman legions.

He spends some time at Trimontium Roman Fort as a hostage, though Commander Secundus uses him as a general factotum around the fort. (Trimontium is referred to currently by archaeologists as Newstead Roman Fort, Melrose) Beathan is not technically a common slave, since he has been singled out as a hostage by General Agricola, yet the tasks he is forced to perform are very much those that the menial fort slaves are forced to do.
When General Agricola arrives at Trimontium, en route to Rome since Emperor Domitian has recalled him, things change for Beathan. The roads Beathan travels on are not just the roads laid down inside Trimontium Fort. Beathan is forced, in chains, to trek down what is now termed Ermine Street. This is the main road the Romans laid down to link Londinium (London) in the south of Britannia to the fortress at Lindum (Lincoln). Ermine Street was then continued to facilitate transport of goods and personnel to the fortress at Eboracum (York), and then even further north to the supply fortress at Corstopitum. There is some conjecture as to the spelling of this fortress but the locals seemed to call the area Coria.


Coria is the name which would likely have been familiar to Beathan, though his uncle Brennus – the one who became a spy for the Brigantian King Venutius – was familiar with both names for the fortress. Coria is not so far from Trimontium Fort and Ermine Street continues northwards from there.

You could say that when Agricola drags Beathan from Trimontium, they are using the same road the whole way to Londinium. From Londinium, they board a ship of the Classis Britannica (Roman Navy in Britain) which takes them to the port of Gesoriacum Bononia (Boulogne, France). The Classis Britannica appear to have used the route regularly to ferry across men, goods and animals. Gesoriacum Bononia was a place Beathan would have been quite taken with, though they didn’t linger there. 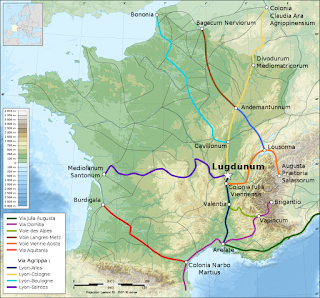 The Bononia part of the name was probably associated with the Celtic oppidum (large settlement/city) that was nearby, the name still used in the time of Tiberius some 80 years before Bethan was there. Beathan might also have been astounded with the lighthouse built by Caligula in AD 40 during his putative attempt at invading Britain. More gallingly, Beathan perhaps had it pointed out to him by Agricola that they were in the region where Emperor Claudius set forth with his ships on his rather more successful invasion of Britannia in AD 43, a few years before Beathan’s parents were born!

Portus Itius in Nord-Pas-du-Calais is a name that’s also referred to in Ancient Roman documents. Though unproven, Port Itius is thought to have been the same port as Gesoriacum, the name having changed a few times over the hundreds of years of Roman occupation.

The last notable stretch that would never have been erased from Beathan’s memory was the road between Ostia, the port of Rome, and the city of Rome - the via Ostiense. Already very ancient it would probably have seemed little different from all of the roads that Beathan had already travelled on, since the Roman army was in charge of road maintenance on their main military conduits.

One cobble stone must have seemed just like every other!

The roads might have seemed a bit repetitive to Beathan when he spent months tramping them but he was later to find that some roads in side Roman forts actually were different.

Posted by Nancy Jardine Author at 21:54