Yes, they do say all good things come to an end... 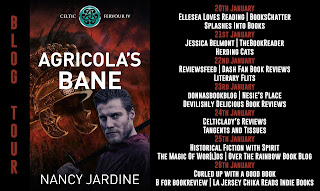 ...and such can be said for the excellent blog tour for Agricola's Bane that was organised by Rachel's Random resources. The tours are seamlessly professional and my thanks go to all of the wonderful bloggers and to Rachel Gilbey for their time and expertise respectively.

Four Guest Posts written by me were very well-received; I had one really entertaining Author Interview to answer; Four Extracts were posted;  and along with general promotional material, a wonderful clutch of 10 new Reviews has been gained for the novel, most in the 4* and 5 * grades.

Choosing which of the reviews to mention is a difficult task since they have been highly complimentary of the writing of the series and/or really positive comments. The variety of responses has been extremely useful as I continue with my writing.

The full reviews can be accessed from the top tab section on this blog titled:  'Celtic Fervour Saga Series Blog Tours' . But just to whet the appetite here are a few more comments...
"As ever, I have enjoyed the story from both sides of the battle lines. The Celts and their unyielding determination to remain free of the Roman yoke is inspiring to read. Equally, the complexity of the ever-expanding Roman empire and their struggles in a new challenging climate are really interesting too!"

"This is the fourth instalment now in this fantastic series and it is just as good as the previous books which I also rated very highly!"

"And we’re back with the Garrigill Clan! We’re on the move again, this time with Enya and her two companions as they travel through territory after territory to track down her family. As with previous instalments in this wonderful series, we have several strands to the story, and although rooting for Enya and her companions (including the lovely Nith!), it’s good to see both sides of the story. Yes, the Romans are invaders, but life isn’t a picnic for those at the northern reaches of the Empire."

"The descriptions are wonderful as usual, letting you really immerse yourself in the story and imagine what it was like being there."

Meanwhile I'm now beavering away with my latest writing, creating new promotional posters and learning more Scots Gàidhlig. Oidhche Mhath! (Good evening/well, it is for me in my part of Scotland)