Today, it's my turn to post a contribution to the fantastic Historical Writers Forum December Blog Hop!
During the hop, there's an excellent selection of authors posting about all sorts of December topics set in many different historical eras. (See the end of the post for a list of participating authors) Given that Christmas Day is looming, it's likely that many of the posts are Christmas themed and are geared towards the Christian 25th December.

My post, today, also contains information about the 25th December but since my historical novels are set in Roman Britain, it's not about Christianity. My time-travel historical adventure - The Taexali Game -  is set in the early 3rd century. This is an era when the main deities worshipped by my characters would have been mainly of the Celtic and Roman pantheons, with a smattering of gods worshipped by some Ancient Roman soldiers conscripted from the North African and Eastern Mediterranean territories of the Roman Empire.
The Ancient Roman Emperor Severus and his son Caracalla are characters in The Taexali Game. My question for today is who might they have been worshipping on the 25th December, when they were in Northern Britannia in A.D. 210?
25th December ... devotees and fragmentary evidence
For some time prior to A.D. 208, the Maeatae and Caledon federations of tribes (north-east Scotland) seem to have been reneging on treaty obligations made with Ancient Rome. In response to a plea from the Governor of Britannia, Emperor Septimius Severus and his son Caracalla travelled to Britannia in 208 with a huge entourage, including Severus’ wife Julia Domna and his younger son Geta.

Leaving Julia Domna and Geta in Eboracum (York), Severus and Caracalla (nominally joint Emperor with his father from 198) marched northwards with 40 - 50,000 troops to teach the northern barbarians a lesson they wouldn’t forget in a hurry – though the campaign was actually spread out over a period of approximately three years. ( A little like this post because there's a wheen o' reading before I properly get to the 25th Dec.)

An Ancient Roman army marched with military might and associated weaponry, but it also sported a variety of religious adherences. Sometimes a particular devotion depended on where a unit of men originated from; or which faith was their personal one; and it could even be the ‘god-cult’ their legion collectively supported.


Since festival worship was ritually common across the Ancient Roman Empire, it's likely that Severus and Caracalla paid some sort of homage on the 25th December in 208, 209 and 210 while in Britannia - since the 25th Dec was a 'more major' festival than some others. They may have wintered in Londinium; Eboracum; Brigantia (Hadrian's Wall area); or further north in Caledonia. Sadly, a month by month calendar of their whereabouts during the campaign eludes me.


Caracalla (Marcus Aurelius Severus Antoninus Augustus) is thought to have worshipped the gods Serapis, Sol and the associated Mysteries of Mithras. Coin evidence (above) was minted in his time depicting Sol Invictus wearing a typical sunray crown and at some point Caracalla added Invictus to his titles.

Though it’s not known if Emperor Severus had a specific ‘god’ preference, it’s thought by some scholars that he was likely to have been influenced, to some degree, by the religion and cult worship that his wife was associated with. Julia Domna's father was descended from Syrian royalty and served as a high priest in the cult of the sun god Elagabal /Sol Invictus.

Severus was known to have been of a very superstitious disposition, though it has to be said that religious-based superstition was common across the Ancient Roman Empire. Severus was hampered by a debilitating condition for a number of years before he died and was sometimes carried in a litter on campaign, presumably when riding was physically impossible for him. He consulted his soothsayers on all aspects of his daily life and appears to have been given a ‘death-sentence’ even before he left Rome. It is written (e.g. by Cassius Dio) that Severus was told that he would die while on campaign in Britannia, but the dire forewarning didn’t stop the emperor from setting off to subdue the troublesome Caledonian tribes.

There is also the fabulous tale that Severus' sons were delinquents and one of Severus' reasons for coming to Britannia was that some proper army campaign discipline would be salutary for the naughty nickums! (From what I've read of Caracalla's exploits - killing his brother Geta not so long after Severus' death - meant that strategy didn't work so well!)

During the Severan Caledonian campaigns of A.D. 208 to 210, Severus and Caracalla spent time, huge amounts of money, and immense effort in renewing and reinforcing the forts along Hadrian’s Wall. A heavy Roman presence had likely been absent from most of Scotland during the last decades of the second century A.D.  but there’s archaeological evidence to show that there was a programme of renewal and renovation of permanent forts in southern and central Scotland during the very early third century. Re-garrisoning, and strengthening, was also undertaken in forts along the Antonine Wall (Glasgow /Edinburgh) and as far north as the legionary fortress at Carpow (Dundee).


In some of these forts, evidence of Sol; Sol Invictus (the unconquerable sun god) and Mithraic cult worship has been found.


The cult of Mithras is thought to have appeared in Rome during the first century A.D. and gradually spread across the Roman Empire.  During the third century A.D. a temple dedicated to Mithras was built at Walbrook in Londinium (London), possibly during the Severan era. The marble head of the god Serapis (an Egyptian god of the Underworld) found at the London Mithraeum, dates from the second to early third century; and the head of the god Mithras also found there is dated A.D. 180-220.

Exactly how Serapis and Mithras worship was connected is a subject of great speculation but Caracalla, or Severus, could probably have told us!

At some later date, possibly around the fourth century, the heads had been deliberately buried along with a head of Minerva and a figure of Mercury when a new temple to Bacchus was built on the same site.

It was common for Ancient Roman campaigning troops to spend the winter season in a place of relative comfort and safety. Severus and Caracalla may have spent some winter-time in Eboracum with Julia Domna and Geta in 208, 209 and perhaps even 210 - though these details are unknown.

Nominally, the Ancient Roman summer campaign season traditionally ended on 19th October with the festival of the Armilustrium. This was held in honour of the god Mars, when the weapons of the army were ‘ritually purified and stored’ till the following year. (The Tubilustrium, on the 19th March, was when similar ceremonies began the new campaign season) It's not clear exactly how long these already ancient traditions continued into the late Empire phase, but since Severus was so superstitious, ritual ceremonies of some form may have marked an October Armilustrium wherever he was stationed. However, it’s highly unlikely there was any literal downing of weapons in troublesome Caledonia. Yet, paying proper observance to the god Mars would have been a symbolic boost.

When practical, a number of festival days may have been observed in some form, or other, by the Severan armies between late October and December, the Saturnalia of 17th to 23rd December being one of them. (N.B: The Saturnalia may be written about by another author of the Historical Writers Forum)


The end of the Saturnalia was followed by the Brumalia, traditionally celebrated on the shortest day – bruma meaning short day – and included the following few days when the sun is reborn after ‘staying still’ on the solstice. In the darkest days of mid-winter, during the rainy and cold grey days in northern Britannia, celebrating the sun god Sol would have been an important lift to the spirits of many Roman soldiers.

Offerings to Sol/Sol Invictus were given on the nominated day of the 25th Dec. which was then regarded as the winter solstice. Evidence from forts on Hadrian’s Wall and southern Scotland forts like Trimontium (Newstead) support Sol worship.

The distinctions between worshipping Sol (the sun god) and that of Sol Invictus (the unconquered sun god) are not clear, but it wasn’t till the end of the 3rd century that worship of Sol Invictus gained much more prominence and Sol Invictus became an official state god.

(NB: We now assign the date of the winter solstice to the 21st or 22nd of Dec. as a result of subsequent calendar changes after the Roman period)

I like to think that wherever Emperor Severus was on Dec 25th A.D. 210 (by the Julian calendar), he was worshipping Sol Invictus and was asking for a more definite date of death, or even a respite from the gout, severe arthritis, or debilitating crippling disease that he had been beset with for many years. He may also have been asking his soothsayer for more clarity about the incident where his nasty son Caracalla attempted to assassinate him while on campaign in Caledonia. I had great fun creating a scene which included this incident in The Taexali Game.

Emperor Lucius Septimius Severus died in Eboracum on the 4th February, 211. Whether or not Caracalla urged his doctors to hasten the emperor's death is not proven - the jury is still out -  but again, ancient writers mention that there was a 'bloody clearance' of people who had been present at the death of Severus, or who had regularly attended the emperor.

Worshipping the sun on the solstice seems like a great idea for the ancients on a cold and frosty, northern, 25th December day!

You can click the sidebar link to read more about my Romano/ British fiction using the Amazon 'look inside' facility. They are also available to read  FREE with Kindle Unlimited and available in ebook and paperback formats on Amazon. 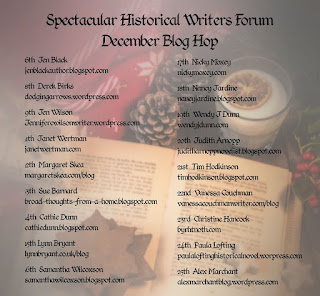 The next post in the Historical Writers Forum December Blog Hop will be by Wendy J Dunn - look out for that coming tomorrow!

Happy Reading to all and I wish you a joyful  festive season.

Posted by Nancy Jardine Author at 09:31